Archive for the category “Cristiano Ronaldo”

Spain to reign against Portugal

Today’s match between Spain and Portugal in the first semifinal of Euro 2012 should be one heck of a match.

Spain is looking to become the first team to win three consecutive major tournaments, while Portugal is hoping to ride the brilliance of Cristiano Ronaldo to the finals.

After scoring only one goal in his last three international competitions, Ronaldo has found the net five times so far in this tournament, with game winners in the last two matches.

“He’s a demanding player to face, mentally and physically,” Spain’s Alvaro Arbeloa told The Guardian. “When you play against the best, people who are playing spectacularly well, it’s always tough. You know you have to be at your very best. I like to measure myself against the best players of the world and it’s a great challenge. Of course you can’t stop him for 90 minutes, but it’s a nice battle.”

If there is one team that should know how to slow Ronaldo – and which buttons to push to knock him off his game – it would have to be Spain, whose roster is filled with players from Ronaldo’s club team, Real Madrid, as well as Real’s biggest La Liga rival in Barcelona.

Plus Spain has yet to play its best game in the tournament, which they have been criticized for.

“Football is great because not everyone likes the same thing,” Andrés Iniesta told The Guardian. “Variety is nice; it’s good to have a diversity of opinions. We have a way of playing that has brought us success and for us there is no other way. Those opinions [attacking Spain] are perfectly respectable but it is true that when there is [only] one team that always wants to attack and has a rival that only wants to close off, drop deep, and avoid danger, of course the football is not as attractive as when both teams want to win and open up to attack each other.

As for Ronaldo, he says it’s all good.

“I am not feeling the pressure of playing Spain or any other team because it is part of my life,” he told The Daily Mail. “I will always have responsibility but pressure? Not much.”

We’ve been along for the ride with Spain since the start of the last World Cup and we see no need to hop off now. 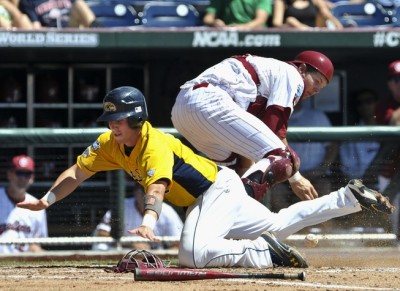 It’s not the way we wanted to see it end, but the Kent State baseball team still had one heck of a run.

The Golden Flashes were eliminated from the College World Series on Thursday, losing to two-time defending champion South Carolina, 4-1. Gamecocks pitcher Michael Roth allowed only two hits and didn’t allow a base runner after the second inning.

“We have a lot of guys returning next year, and with all of this experience under their belts, it will help them out a lot,” Skulina told The Associated Press. “We have a really good class coming in next year for our freshmen. So that’s going to motivate them to want to beat us out for spots and be able to play, so that’s just going to make our team better.”

The Golden Flashes finish the year at 47-20. Along the way they won the Mid-American Conference championship for the fourth consecutive year, swept through their regional and beat Oregon in the Super Regional to become the first MAC team to reach the College World Series since Eastern Michigan in 1976.

Once in Omaha, Kent state lost the opening game against Arkansas, but rallied to eliminate the top-seeded Florida Gators before falling to South Carolina.

END_OF_DOCUMENT_TOKEN_TO_BE_REPLACED 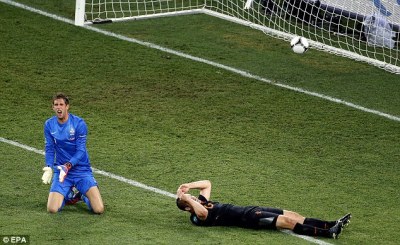 The Netherlands are out of Euro 2012 following Sunday’s loss to Portugal. We knew someone among the power trio of Germany, Holland and Portugal would not make it out of the Group of Death, but we didn’t think it would be Holland, the fourth-best team in the world according to the FIFA rankings.

And we definitely didn’t think they would exit without picking up a single point in group play.

“We have failed with the entire squad,” Arjen Robben told The Daily Mail. “It is time to look in the mirror with all the players. We must all do that. Individually we should look in the mirror and as a team. We have been knocked out in a major tournament with three defeats and that is the stone hard truth. It was a disastrous campaign.”

They were done in by two goals from Cristiano Ronaldo, who finally decided to show up for the tournament. Ronaldo tied the game in the 28th minute and put the winner home in the 74th minute.

Portugal advances to the knockout stage to face the Czech Republic on Thursday. Both teams advanced by bouncing back after losing their opening games in group play.

Germany also advanced out of Group B, winning all three of its matches, and will face Greece on Friday.

When there’s nothing to write about …

write about the Cleveland Browns!

As the team closes out the final week of Organized Team Activities, the focus has turned to who will be the No. 2 and No. 3 quarterbacks on the roster this fall.

It’s been clear since draft night that, barring an injury, Brandon Weeden is going to be the starter. Which leads to speculation over which lesser of two evils – Colt McCoy or Seneca Wallace – will be holding the clipboard come game day.

As a decision doesn’t have to be made today, coach Pat Shurmur isn’t really worried about it.

“I don’t see the urgency right there, but in terms of the backup situation, I can see a scenario where all three of the players you’re talking about will be here,” Shurmur said earlier this week. “I think that’s fair.

“I favor that, keeping three. I like that model. I know we’re nearing half of the teams in the league that keep two, but I like having three.”

Wallace, a noted team player, isn’t really on board with the three quarterback scenario.

“No not really (I don’t want to be third),” Wallace told The Plain Dealer. “That’s something for no reason you go down to the third guy and we all know the third guy doesn’t dress on Sundays and if that comes down to that decision, obviously neither (he or McCoy) wants to be that third guy.”

While Shurmur may not be in a hurry to name his depth chart at the position, one of his comments may have offered a clue.

END_OF_DOCUMENT_TOKEN_TO_BE_REPLACED

With Euro 2012 starting on Friday in Poland and Ukraine, we continue our look at the 16 teams today focusing on Group B, the glamour group of the tournament with Denmark, Portugal, Germany and the Netherlands (or Holland, depending on who you ask).

The Teams
Denmark, currently at No. 9 in FIFA’s world rankings, won all four of its home games in group play, including a 2-1 win against Portugal to clinch the group. Problem is, this tournament isn’t being played in Denmark.
The one thing the Danes do have in their favor is coach Morten Olsen, currently the longest-tenured coach of any national team. Olsen has led the club as it qualified for World Cups in 2002 and 2010 and for the Euros in 2004 and 2012, and that experience will be needed for the squad to have any hope of coming out of the toughest group in the tournament.
The same can be said of captain Daniel Agger, who knows all about playing on the big stage after spending the past six years with Liverpool. Agger’s ongoing injury issues – he only played in four of Denmark’s 10 qualifying matches – are a concern for a squad that doesn’t have much depth.
The Netherlands (No. 4 in FIFA’s rankings) are coming off an ugly loss to Spain in the finals of the last World Cup but enter Euro 2012 in good form, having won nine of their 10 qualifying matches.
With Robin van Persie (48 Premier League goals over the past two years), Arjen Robben (Footballer of the Year in Germany in 2010 for his play with Bayern Munich) and Wesley Sneijder (five goals in thee 2010 World Cup), the Dutch should not have problems scoring goals (and let’s not forget Dirk Kuyt, the hardest-working man in the game), but they need to be more creative, especially if they are going to play Nigel do Jong and Mark van Bommel as holding midfielders.
“The problem with two holding midfielders is quite simple, but somehow many coaches don’t see it,” complained Dutch legend Johan Cruyff, according to ESPN. “The build-up happens too slow; holding midfielders always need that extra touch, always need to have a look when they have the ball already … plus, having two holding midfielders means there is one less creative playmaker.”
Portugal (No. 10 in FIFA’s rankings) is led by Cristiano Ronaldo, whom ESPN ranks as the No. 1 player in the tournament, and who has 84 goals and 22 assists in 67 games over the past two seasons for his club team, Real Madrid.
The squad struggled in qualifying, though, losing to Denmark and Norway in the group stage before a playoff win over Bosnia & Herzegovina secured a tournament spot.
Then there is Pepe, who some consider one of (it not the) dirtiest players in football. As ESPN points out:

Apart from being dirty, Pepe can be termed, to put it bluntly, a big baby. Not ashamed of clattering into opponents with no intent to win the ball, a faint touch sends the defender down. The latest example of his childish behavior came in the Champions League semifinals against Bayern Munich, when Pepe writhed on the ground after Franck Ribery made mild contact with his arm.

Germany (No. 3 in FIFA’s rankings) is a three-time winner of the tournament and is consistently a favorite in any competition. The team was perfect in group play, finishing 13 points ahead of second-place Turkey. The Germans scored three or more goals in eight of their 10 qualifying matches.
The availability of Bastian Schweinsteiger, who injured his thigh in the Champions League final, was in doubt but the midfielder has been cleared to play which can only be good news for Germany, which looks to end a 16-year title drought.
“This is the best national team I have ever played for,” Schweinsteiger, capped 90 times for Germany and going into his fifth major tournament, told The Daily Mail. “Everyone expects us to win the title and naturally it is something that we also desire.”
Did You Know?
Germany’s players will be allowed to drink, smoke,tweet and mix with their girlfriends at Euro 2012.
Games to Watch
Pretty much every one of them in this group, and when they are not busy delivering flying karate kicks to the opposition, Holland is just such a good team (plus we have to be partial to any team that has Orange as one of their primary colors). It will most likely come down to the final group game on June 17 between Holland and Portugal, but we think the Dutch will make it through.
Who Will Advance?
Wow, this is a tough one (they don’t call this the Group of Death for nothing, you know). Something really bad would have to happen to see Germany not make it out of this group, and Holland should have enough to advance as well.

For additional coverage, be sure to check out The Daily Mail, The Guardian, EPL Talk and ESPN.