Archive for the category “football” 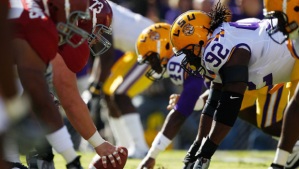 A favorite past-time among college football fans is complaining about the Bowl Championship Series – and this year is no different.

While the BCS is clearly not as good as a 16-team playoff would be – something that, oh by the way, never existed – it is still better than the old system, where teams (Notre Dame) would be accepting bowl bids in early October (Notre Dame) based on a three-game win streak against the service academies (Notre Dame).

So while it is better, this year it’s … not.

Unless Georgia pulls off an upset Saturday night in the SEC Championship game (the Bulldogs are 14-point underdogs), it seems pretty clear that we will be seeing LSU vs. Alabama for the second time this season.

And while it is easy to make a case that the Crimson Tide are the second best team in the nation, the idea of rematch just doesn’t sit well with us.

First off, Alabama already had its shot at LSU and lost. There’s also the fact that Alabama couldn’t even win its division, let alone the conference. Shouldn’t that be one of the criteria for a team to find itself in the national title game?

Finally, if there is a rematch that means LSU would have to beat Alabama twice to claim the title, while, for Alabama, it would be as if the first game never happened. Win on Jan. 9 and all is forgotten.

The problem is there really isn’t anyone else who can take the place of the Crimson Tide.

If Houston wins on Saturday to close the season at 13-0, the Cougars deserve to be in a BCS bowl, just not the title game. But you have to reward them for going undefeated.

Virginia Tech could make a case if they win the ACC Championship game to finish at 12-1, but the Hokies loss came to Clemson, who they are playing Saturday night. Like Alabama-LSU, you can’t reward the Hokies for beating Clemson and not count their earlier loss against them.

Oklahoma State probably had the best chance to jump over Alabama, but a loss to heavy underdog Iowa State hurts too much, even if the Cowboys win the Big 12.

Oregon is going to win the Pac 12, but the Ducks have two losses, one to LSU, so they’re out.

Thankfully we don’t have to worry about a Big 10 team getting involved (you’re welcome, America).

And let’s not even get started on the Big East, which inexplicably has an automatic BCS berth. At best, the Big East will have a three-loss team as its champion, at worst it will be a five-loss team.

If that happens, the Mountaineers would still need help from the polls, as the champion would be determined by which team has the highest ranking in the final BCS standings.

So it looks like LSU vs. Alabama – by no means a bad match-up – come the title game.

Of course, LSU could still drop the ball Saturday night, which would knock the Tigers out of the title game. Unless the voters decided they want a rematch so bad they just switch Alabama and LSU in the standings.

But that would never happen.

“Winning is a habit. Unfortunately, so is losing.” – Vince Lombardi

After watching the Browns for more years than we care to admit, we know all about the habit of losing that surrounds the franchise.

And in some ways this year is no different as, even after Sunday’s win against Jacksonville, the Browns still sit at just 4-6 on the season.

But there is a subset of fans who have decided that, even when the Browns win, that the team are losers, Pat Shurmur isn’t qualified to coach a junior high JV team and every decision Mike Holmgren makes is wrong.

What we don’t understand is why? What did people realistically expect out of this team this year? A division title? A playoff game?

The Browns entered the season off of consecutive 5-11 seasons (and the year before that they were just 4-12) with holes to fill and questions to answer all over the team.

So far, the team is what they should be – they lose to teams that are better than them, and beat, or at least are competitive, against teams of equal talent.

Should that really be a surprise?

The angst has reached such a low that some are longing for the days of Eric Mangini and his 10-22 record (33-47 career mark). The common refrain is that under Mangini the Browns were “competitive.”

But was that really the case?

People moan about the offense, as if the Browns were the reincarnation of Air Coryell under former offensive coordinator Brian Daboll. But after finishing 32nd (2009) and 29th (2010) the past two years, the Browns currently sit at 29th overall. The passing game is 23rd (after being 32nd and 29th). Only the running game – hit hard by injuries – has dropped, from 20th last year to 29th this year.

But that hasn’t really impacted scoring. Even with all their troubles getting into the end zone this year, the Browns are right in line, averaging 14.5 points per game this year, compared to 15.3 in ’09 and 16.9 in ’10. Add in a couple of Phil Dawson field goals and the Browns would be right where they have been the past few seasons.

There’s no question the defense is better, ranking 5th overall and 1st against the pass. For someone who was sold as a defensive genius, the Browns finished 31st and 22nd overall in defense under Mangini, and never higher than 18th against the pass. The one constant has been the Browns inability to stop the run, no matter who the coach is.

It’s expected the defense should be improved, however, as the Browns have focused on defense in the last two drafts. But by saying that, isn’t that a sign of progress?

The bottom line in all this is the Browns are still not a good team. After four years of Phil Savage and his “talent evaluation” plus the infamous 2009 draft by Mangini – where the Browns had four of the first 52 picks and somehow only walked out with one NFL-caliber player and a No. 3/4 wide receiver – left this team in a serious hole.

But more importantly, this isn’t a finished team.

This team is still playing catch-up after not having a normal off-season of OTAs, mini-camps and training camp that would have provided a young quarterback and wide receivers about 1,000 snaps of practice.

Through 10 games of the season so far, the Browns have had 653 snaps on offense, so you don’t think those 1,000 snaps would have helped? The simple fact is there’s no replacing that missed time that the team desperately needed.

General manager Tom Heckert has done a nice job in his first two drafts, and with two first round picks next year and multiple picks in later rounds, the team should keep adding young talent.

Judging from the past two weeks, Shurmur may have figured out what Colt McCoy does best and started fitting the game plan around those skills (we would have liked to seen that sooner, but as Mick Jagger once said, you can’t always get what you want).

The franchise is finally going about things the correct way, something fans have been waiting for for we don’t know how long, but people still want to piss and moan and take a micro-view of the team. There’s no guarantee that things are going to work out, but the important part is the Browns are doing it the correct way.

We don’t get to see wins around here very often, let’s just try and enjoy them when we do.

With the NFL releasing the 2010 schedule last night, there are several dates Browns fans should circle on the calendar.

For the first time since they returned in 1999, the Browns will open on the road, taking on Tampa Bay. That’s probably a good thing as the Browns are 1-10 in season openers since 1999.

Also the Browns are not scheduled for Monday night, Sunday night or Thursday night. Not sure how that happened since I’m pretty sure the NFL bylaws require them to play Pittsburgh at home on Thursday night.

The other big dates are the Jets at home on Nov. 14, which should be the most intense regular-season game since Marty returned with KC – still the most physical game I’ve seen the Browns take part in.

The Browns’ strength of schedule is 10th. And for some reason they face a brutal stretch in late November with four road games over a five-week span.

I’m ready for some football.