Archive for the category “Joe Banner”

Grantland published an interesting article today about Chuck Klosterman’s visit to Berea to get a look inside the Cleveland Browns draft room during last month’s NFL Draft.

It is a good but not very revealing read, primarily because of the absurd level of secrecy that envelopes Browns headquarters. The new brain trust has apparently determined that operatives from Pittsburgh, Baltimore and Cincinnati are working overtime to steal the secrets of a perennial 5-11 team. (Mike Lombardi went as far as erasing Barkevious Mingo’s name from a white board before a member of the Browns IT department was allowed to enter the room.)

Other tidbits included Lombardi questioning Klosterman about which font would be used for the story, telling an inane story about the kind of typewriter author Robert Caro uses, and going on about “the candle problem.”

END_OF_DOCUMENT_TOKEN_TO_BE_REPLACED 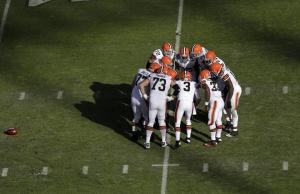 Talking isn’t doing. It is a kind of good deed to say well; and yet words are not deeds. – William Shakespeare

Three days later and we’re still trying to wrap our brains around the fact that Cleveland Browns owner Jimmy Haslam signed off on a deal to bring Mike Lombardi back to Cleveland.

Plenty of people are talking about the decision – not surprising since Lombardi has not actually worked in the NFL since 2007 – and we have to wonder just what it is that 99 percent of the NFL missed on Lombardi all these years. So many openings, so few job offers.

So let’s take a look at what Lombardi’s biggest supporters have been saying.