Archive for the category “Scott Fujita”

END_OF_DOCUMENT_TOKEN_TO_BE_REPLACED

Cleveland Browns linebacker Scott Fujita was among four players notified Tuesday that NFL Commissioner Roger Goodell has upheld the player discipline that was imposed on the players for their involvement in New Orleans’ bounty program.

Fujita is suspended for three games, Will Smith four games, Anthony Hargrove eight games and Jonathan Vilma for the entire season. Goodell said he retains the right to reduce suspensions should new facts arise, and the each player still is free to meet with him to present his side of the story.

“Throughout this entire process, including your appeals, and despite repeated invitations and encouragement to do so, none of you has offered any evidence that would warrant reconsideration of your suspensions. Instead, you elected not to participate meaningfully in the appeal process…” Goodell wrote in a letter to the players, according to NFL.com.

END_OF_DOCUMENT_TOKEN_TO_BE_REPLACED

Is there a silver lining to Fujita’s suspension?

The Cleveland Browns now know they will be without Scott Fujita for three games this fall, as the NFL announced on Tuesday that the veteran linebacker and three other players have been suspended without pay for conduct detrimental to the NFL as a result of their leadership roles in the “bounty” program that ran in New Orleans from 2009 to 2011.

“It is the obligation of everyone, including the players on the field, to ensure that rules designed to promote player safety, fair play, and the integrity of the game are adhered to and effectively and consistently enforced,” NFL Commissioner Roger Goodell said in a statement. “Respect for the men that play the game starts with the way players conduct themselves with each other on the field.”

According to an NFL statement announcing the suspensions: “The record established that Fujita, a linebacker, pledged a significant amount of money to the prohibited pay-for-performance/bounty pool during the 2009 NFL Playoffs when he played for the Saints. The pool to which he pledged paid large cash rewards for “cart-offs” and “knockouts,” plays during which an opposing player was injured.”

END_OF_DOCUMENT_TOKEN_TO_BE_REPLACED

Will the Browns pay for the Saints mistakes? 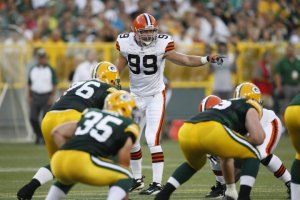 Like comic book hero Thor, NFL Commissioner Roger Goodell brought down the heavy hammer of justice on the New Orleans Saints on Wednesday for the team’s role in rewarding players for intentionally injuring the opposition.

In suspending Saints coach Sean Payton for the entire season, defensive coordinator Gregg Williams indefinitely, general manager Mickey Loomis for eight games, assistant head coach Joe Vitt for six games, fining the team $500,000 and taking away second-round draft picks in 2012 and 2013 (that’s a lot of work for one day), Goodell sends the message that this kind of behavior won’t be acceptable on his watch.

“Beyond the clear and continuing violations of league rules, and lying to investigators, the bounty program is squarely contrary to the league’s most important initiatives – enhancing player health and safety and protecting the integrity of the game,” Goodell said in a statement announcing the discipline. “Let me be clear. There is no place in the NFL for deliberately seeking to injure another player, let alone offering a reward for doing so. Any form of bounty is incompatible with our commitment to create a culture of sportsmanship, fairness, and safety. Programs of this kind have no place in our game and we are determined that bounties will no longer be a part of the NFL.”

END_OF_DOCUMENT_TOKEN_TO_BE_REPLACED

“A lot of us have a lot of respect for Eric Mangini,” Fujita said. “(Eric’s) one of the best I’ve ever seen at understanding the big picture and drawing it up on the board, especially when it comes to red zone defenses.

“In Eric’s last message (to the team) he talked about what we were trying to do,” Fujita said. “He told us how much he appreciated working with us and trying to be the best we could be every day. He told us to keep moving this thing in the right direction. He’s just a class act.”

On Holmgren’s search for a new coach:

“(Mike) is a lot more sensitive to the coaching side. All of us have the utmost confidence in Holmgren making the right decision.

“Joe is going to be so good; he has Ed Reed and Darren Sharper-like ball skills. When he played, Joe made plays. He’s a corner who is not afraid to come down and tackle, and you don’t see that much more in the league.”

“Colt, for him to come in and start and grab everybody in the huddle and take charge was so impressive. He has the same type of leadership skills as Drew Brees, he plays hard and knows how to inspire the people around him.”

First it was his son, now Jon Gruden’s dad thinks the Browns would be a good fit for his son.

And we should care why?

Found an interesting article through Uni Watch about what might have been if Otto Graham hadn’t been benched 10 games into the 1945-46 National Basketball League season.

That’s right, Graham played basketball for the Rochester Royals but gave the sport up after being benched.

Holy s###! The Dolphins are reportedly ready to give Jim Harbaugh $8 million a year to coach the team. For a guy who has never coached on the NFL level and carries a 29-21 record at Stanford, built mostly on the arm of Andrew Luck.

For that the Dolphins are willing to make him the highest-paid coach in the league. Unbelievable.