Archive for the category “Shin Soo-Choo”

As the Cleveland Indians offensive malaise continues, it may be time for the team to try a new approach.

Namely, stop striking out so much.

The Tribe is currently striking out an average of 7.3 times a game, which projects to 1,183 Ks on the season. That total would put this year’s team just outside the Top 5 all-time in team history for most strikeouts in a single season.

And the numbers have been worse since Bruce Fields took over for Jon Nunnally – even though one of the reasons given for Nunnally’s firing is the team was striking out too much.

In the seven games with Fields as hitting coach – admittedly a small sample – the Indians have struck out 65 times in 186 at bats – or 35 percent of the time.

Cut back on those strikeouts and the team might actually start scoring runs again. When they put the ball in play, the Tribe is batting .318 this season – compared to .247 when you include the strikeouts.

That’s a pretty big difference. Might be time to start choking up on the bat a little more guys.

Shin-Soo Choo had surgery on his left thumb this morning and will be out eight to 10 weeks.

Which means, as hard as it is to believe, we could be looking at the Austin Kearns, Travis Buck and Shelley Duncan trifecta in right field for some time now.

“There is only so much you can do,” manager Manny Acta told The Plain Dealer. “You can talk to the 29 other clubs and they’re not going to give up there best player. It’s very tough to find a player of his caliber on any club or in our system. We’re just going to have to do the best we can to have guys pick of the slack. There’s no magic wand on this one. We lost a good player.”

Oh boy, somebody pass us the Maker’s Mark. Like now.

The city of Pittsburgh will hold a rally to “honor” Hines Ward’s win on the reality show Dancing with the Stars.

How utterly appropriate and pathetic at the same time. 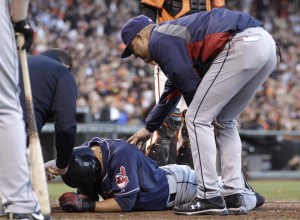 Now that Shin-Soo Choo is going to be out of the Cleveland Indians lineup for a while, we’re eagerly awaiting today’s press conference where Giants general manager Brian Sabean calls for a rule change.

Choo sustained a fractured thumb when he was hit on the left hand with a pitch from San Francisco’s Jonathan Sanchez in the fourth inning of Friday night’s game.

“He’s still at the hospital; he’ going to be out for awhile,” manager Manny Acta said after the game. “This is huge for us. Choo means so much not only to our offense but to our defense and by the way he runs the bases.”

Clearly, pitching inside is inherently dangerous to the batter and must be immediately outlawed.

That’s the new protocol, right? At least that’s what happened when San Francisco catcher Buster Posey was hurt in a play at the plate last month. His agent and Giants general manager Brian Sabean both cried about the injury and how the rules should be changed – conveniently overlooking the fact that Posey was blocking the plate without the ball in violation of a rule that actually exists.

So we fully expect Sabean and the Giants to stand up and publicly reprimand Sanchez for his “malicious” and “unnecessary” pitch, right?

The Giants wouldn’t want to be seen as hypocrites, would they?

Dude, next time call a cab

Pro athletes never cease to amaze us with the poor decisions they make off the field.

Unfortunately, the Indians Shin-Soo Choo is the latest example.

According to The Plain Dealer, Choo was arrested Monday morning for DUI in Sheffield Lake.

Choo was stopped on Route 6 at 2:25 a.m. and failed a Breathalzyer test, registering a .20, more than twice the legal limit of .08, according to the story.

“We are aware of the incident with Shin-Soo Choo and have spoken to him about it,” Indians general manager Chris Antonetti said in a statement. “The Indians organization takes these issues very seriously and we are disappointed in the matter. We will continue to monitor the situation and we will not have any further comment at this time.”

Choo has a hearing scheduled for 5 p.m. on Thursday at the Sheffield Lake Mayor’s Court. Of course, the Indians are supposed to be playing the A’s in Oakland at that time, so …

We certainly don’t take Choo to task for having a few adult beverages – he’s an adult and cocktail hour is one of life’s little pleasures.

But he certainly has the money to call a cab or hire a driver if feels like having a few too many. Or if he wants to hold on to his money, we’re sure there are plenty of Tribe fans who would be willing to be a designated driver for free.

You’d think someone in Choo’s position would use better judgment – especially in a town where Donte’ Stallworth played.

Not a real surprise since this isn’t Boston or New York, but ESPN’s Jayson Stark isn’t a believe in your first-place Cleveland Indians.

In his latest Rumblings & Grumblings column, Stark sizes up the AL Central Division, saying of the Tribe:

Stat of the day: The Indians are the 23rd team in the wild-card era to start a season by going 19-8 or better, and the fifth to do it in the AL Central. Of the previous 22, 15 made the playoffs – but only two of four in the AL Central.

Reason to believe: The Indians lead the league in runs scored per game – and Shin-Soo Choo (.716 OPS) and Carlos Santana (.191 average) haven’t even gotten hot yet. So the offensive upside here is scary.

Reason to worry: The Indians’ shockingly good rotation is tied for the league lead in quality starts – but 11th in the league in strikeout ratio. That suggests this group has had a lot of luck fall its way so far on balls put in play.

The prognosis: We’ve found plenty of people in baseball who believe in the Indians’ ability to crank out runs – and almost nobody who’s sold on this pitching staff being quite this good. “I just don’t see it from a run-prevention standpoint,” one AL executive said. “If I’m wrong and they go on to win 95 games, God bless ’em. But I just don’t see it yet.”

Trust us guys, it’s there, you just have to look harder. Everyone in Cleveland sees it.

We would have thought that someone who “only cares about winning” like Derek Jeter does – or so the myth goes – would realize he’s not the same player and accept a move down in the batting order.

According to an article by Bob Klapisch in The Bergen Record:

“… among American League shortstops, Jeter is 16th in slugging percentage – an embarrassingly low .270. Pitchers no longer fear throwing him fastballs up in the strike zone. In fact, the scouting report has become a virtual prophecy: Jeter can be softened up with inner-half heat, then beaten with breaking pitches down and away.

The result? Just two extra-base hits in his first 100 at-bats. Since June 2010, Jeter is hitting .255, which is reason enough to drop him out of the leadoff spot. Privately, the Yankees would welcome Jeter taking the initiative and offer to drop down to, say, the No. 7 or No. 8 spot.

Jeter take the initiative? How about the manager doing his job and filling out the lineup based on performance, not reputation?

Just for comparison’s sake, Grady Sizemore is hitting .340 with a .389 on-base percentage and a .740 slugging percentage.

Now those numbers are worthy of being a leadoff hitter.