Archive for the tag “Byron Scott”

Stop the coaching carousel, we want to get off 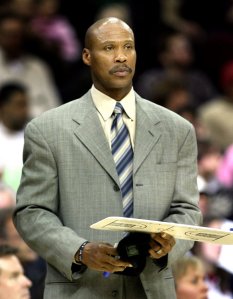 The Cleveland Cavaliers made the speculation that has surrounded the team for the past few weeks reality on Thursday, firing head coach Byron Scott.

Scott was “released” from his duties in Cleveland (the team’s word) after compiling a record of 64-166 and successfully guiding the team into the NBA lottery for three consecutive years.

In other words, Scott did what he was ostensibly hired to do.

Just since September, every pro team in town has fired its manager or head coach, leaving current Tribe manager Terry Francona, who was managing his 14th game with the Tribe on Thursday night, as the most-tenured manager or coach of Cleveland’s three sports team.

Whatever. We’re too tired and we just want to get off the coaching carousel for a while.

Where does Byron Scott rank among Cavs coaches?

This week will bring an end to the 2012-13 NBA season for the Cleveland Cavaliers and, for the third consecutive season, the Cavs will be sitting at home when the playoffs begin.

Much has been made over the past few weeks about the future of Cavs coach Byron Scott, who carries a record of 64-164 as he closes out his third year as coach, making him the longest-tenured coach of a Cleveland sports team. It’s not so much the losing – after all, the Cavs have openly been in rebuilding mode almost from the day Scott took the job – but the historic nature of the losing.

From blowing 20-plus point leads numerous times – including Tuesday night’s in Indiana, when the Cavs became just the second team in the shot-clock era to lose a game that they led by more than 20 points with less than nine minutes to play – to an ongoing lack of attention to defense, many are wondering if Scott will be back for a fourth season when the Cavs return this fall.

All the talk about Scott’s coaching future made us start to wonder just where Scott ranks among Cavs coaches throughout the years. We started following sports in the mid-1970s, so we’ve actually seen every head coach that’s ever led the Cavs onto the hardwood.

The Cavs have had 12 full-time coaches since entering the NBA in the fall of 1970 (we’re not counting interims, so sorry Don Delaney, Keith Smart, Brendan Malone, among others. And really sorry, Chuck Daly). While Scott is not the best coach the Cavs have ever employed, he’s certainly not the worst.

To find out just where Scott ranks, head over to The Cleveland Fan.

There are a lot of things that are out of the control of a head coach, which is a lesson that Cleveland Cavaliers coach Byron Scott knows all to well.

You can’t hold it against Scott that LeBron James left in free agency just a short time after Scott took over the job.

Or that center Anderson Varejao missed 51 games in 2011 with a torn ligament in his foot, 41 games last year after breaking his wrist or 57 games this year with a longitudinal split of a muscle between his quadriceps and knee.

Or that point guard Kyrie Irving missed 15 games last season, broke his hand over the summer and has missed 20 games (and counting) so far this season.

Or that Dion Waiters has missed the past week with loose cartilage in his knee that may require arthroscopic surgery.

Or that when he looks at his bench he sees Omri Casspi and Luke Walton staring back at him.

Even taking all those factors into consideration, we can’t help but still feel we need to ask an important question:

Is Scott the right man for the job?