Archive for the tag “Cristiano Ronaldo”

Spain’s reign comes to a crashing halt against Chile 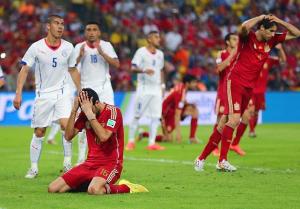 We knew it was going to be difficult for Spain to repeat as World Cup champions – there is a reason no country has lifted the trophy in consecutive tournaments in 52 years – but we don’t think anyone saw this coming.

Following their 2-0 loss to Chile on Wednesday, Spain is out, making them the first defending champion eliminated after just two games.

While the score was not as bad as their opening-game loss to the Netherlands, Spain looked just as out of sorts against Chile and never seemed like a threat to walk out of the game with a much-needed point.