Archive for the tag “Phil Dawson”

Phil Dawson era comes to an end in Cleveland

The Phil Dawson era came to a predictable end on Tuesday as the veteran kicker reportedly signed a contract with the San Francisco 49ers.

The signing ends Dawson’s 14-year career with the Cleveland Browns. He made his final season in Brown and Orange his best as he earned his first Pro Bowl appearance after making 93.5 percent of his field-goal attempts – the second-best percentage in the NFL.

“Hey, Cleveland. Thank you for a tremendous ride,” Dawson wrote on his Twitter account. “Your love, support & encouragement have blessed me deeply. Playing for you has been one of the great joys of my life and I wish you all the best.”

END_OF_DOCUMENT_TOKEN_TO_BE_REPLACED 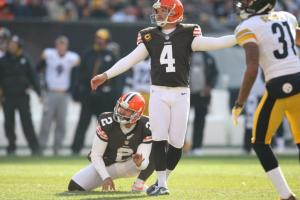 The Cleveland Browns officially began their efforts on Tuesday to win the hearts and minds of Browns fans over what looks to be the inevitable departure of longtime kicker Phil Dawson in free agency.

While it seemed as if the Browns could find a way to work out a deal with a Pro Bowl kicker who has made 14-of-15 field goals from more than 50 yards in the past two seasons and has missed just eight extra points since joining the team in 1999, that seems more unlikely after reading Vic Carucci’s latest on the team’s official website.