Archive for the tag “Trent Richardson”

The winless Cleveland Browns travel to Cincinnati today to take on the winless Bengals in the 78th meeting of the so-called Battle of Ohio.

While much has been made of the fact that the Browns are 1-12 in opening games since 1999, they have actually been respectable in Week 2, going 6-7 in the same span – with four of those six wins coming against the Bengals. However, the Bengals have won three in a row in the series and six of the last seven meetings.

For the full preview of today’s game, head over to The Cleveland Fan.

Where does Trent Richardson’s debut rank in Browns history?

It is certainly not a stretch to say that rookie running back Trent Richardson struggled on Sunday in his NFL debut for the Cleveland Browns.

The numbers speak for themselves: 19 carries for 39 yards and a long gain of just nine yards. Richardson looked like a running back who hadn’t taken a real snap in a game since the BCS Championship game in January, and certainly nothing like the running back the Browns and their fans expected when the team drafted him third overall in the 2012 NFL Draft.

Richardson’s long day brought up a rough comparison to another Browns running back taken in the first round of the draft. According to Cold Hard Football Facts, Richardson’s 2.1 yards per carry was the lowest average for the first running back selected in the draft who was making his NFL debut since – William Green in 2002.

To find out how Richardson ranks with other Browns running backs, head over to The Cleveland Fan.

Not the best day in Brownstown 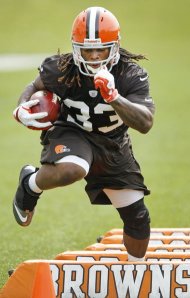 It was a tough day on Wednesday for the Cleveland Browns.

First came the news that rookie running back Trent Richardson – only the No. 3 overall pick in April’s NFL Draft – is heading to Florida to have his left knee further evaluated by Dr. James Andrews. Richardson missed practice on Tuesday with soreness in the knee, which Andrews operated on in February. Richardson had an MRI and is visiting Andrews for a second opinion.