Archive for the tag “NFL”

On the playoffs and the downside of veteran QBs

If Sunday really was the last time we see Peyton Manning on an NFL field as an active player – and it yesterday wasn’t the end, it certainly is coming soon – then the Denver Broncos are about to learn the same hard lesson that teams, including Minnesota and Kansas City, have learned before.

It is also a lesson that the Cleveland Browns and certain corners of the fan base should heed.

When you sign an aging veteran quarterback, no matter how good they are, rather than develop a quarterback, and don’t end up winning a Super Bowl, you run the risk of setting your franchise back even further than you were before you signed said quarterback.

The Chiefs learned that lesson back in the day with Joe Montana, the Vikings learned it a few years ago with Brett Favre, and now the Broncos are about to learn it as well.

END_OF_DOCUMENT_TOKEN_TO_BE_REPLACED

What does 2014 have in store for the Cleveland Browns?

The Cleveland Browns open the 2014 NFL season on Sunday in Pittsburgh, a season that will see the Browns mark the 50th anniversary of their last (and Cleveland’s last) championship.

It was quite the offseason for the team, one that we’re sure fans and team officials are ready to put behind them. We’re all familiar with those storylines by now: the shakeup of the front office, yet another coaching change, the quarterback competition that kind of really wasn’t a competition, the prolonged case of Josh Gordon that ultimately resulted in a yearlong suspension.

But once 1 p.m. hits on Sunday, the Browns have the opportunity to put all that behind them and see what they can make of the upcoming season.

END_OF_DOCUMENT_TOKEN_TO_BE_REPLACED 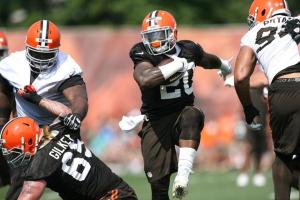 The Cleveland Browns will spend the next six weeks fine tuning their roster as they prepare for the start of the 2014 NFL season on Sept. 7 in Pittsburgh against the Steelers.

The bulk of the roster appears to be pretty much set, but there are still some questions the team will be looking to answer in the upcoming weeks.

Along the offensive line, the Browns will be looking to find a guard tandem from among John Greco, rookie Joel Bitonio, Garrett Gilkey and Jason Pinkston (who has missed practice so far for undisclosed medical reasons). Greco and Bitonio appear to be the front runners and they both bring a nasty streak that will play well in the AFC North. The coaches also need to determine if Mitchell Schwartz really is the answer at right tackle, because if he is not, there are not a lot of good second options.

In the backfield, Ben Tate should win the starting slot at running back, with rookie Terrance West sure to see significant time as well. Who else makes the roster among the running backs comes down to a rather unremarkable grab bag that includes the likes of Dion Lewis and Edwin Baker, among others.

The uncertainty over Josh Gordon’s availability has the starting wide receiver positions in a state of flux, although slot receiver Andrew Hawkins has to be an improvement over what Davone Bess brought to the table last season.

And we’re not even ready to talk about the quarterback position (at least not for a couple of more days).

END_OF_DOCUMENT_TOKEN_TO_BE_REPLACED

The Cleveland Browns travel to Baltimore on Sunday to take on the Ravens.

It will be the home opener for Baltimore, which means they will be unveiling their Super Bowl banner and celebrating last season’s victory in front of the home fans.

Yeah, that’s going to be a laugh riot for the Browns.

Barring something strange happening, one of these teams will walk out of the stadium on Sunday with an 0-2 record on the season.

There are certainly ways that we can see the Browns pulling out a win against Baltimore – but it is not going to be easy.

Let’s try to figure it out as our game preview starts … now at The Cleveland Fan.

Some quick thoughts on Tim Tebow in New England 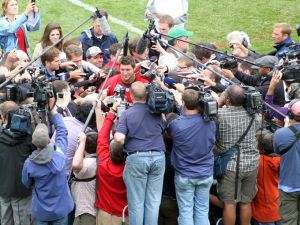 We’ve never minded Tim Tebow the player, it’s always been the hoopla that continually surrounds him that has grated on us.

And that hoopla reached a higher level the past couple of days after Tebow signed a two-year contract (with no guaranteed money) with the New England Patriots, with more than 80 media credentials issued for New England’s mini-camp practice on Tuesday.

It got even better on Wednesday when New England coach Bill Belichick was asked how much “improvement” Tebow had made from Tuesday to Wednesday.

“We’re not going to get into a minute-by-minute evaluation of a player,” Belichick said. “I don’t think that’s the way to go, especially at this time of year.” (That quote right there offers some insight into why Belichick failed in Cleveland. Forget minute-by-minute, we like to evaluate our athletes play-by-play.)

So rather than be part of the solution and just ignore all the mindless noise, we decided to join in, be part of the problem, and offer up a few thoughts on Tebow the NFL player.

END_OF_DOCUMENT_TOKEN_TO_BE_REPLACED

This is what concerns NFL teams about Manti Te’o?

It seems clear that there is enough evidence out there to make NFL teams realize that Notre Dame linebacker Manti Te’o is not a first-round draft pick.

All they have to do is watch his performance against Alabama in the national championship game, where he was exposed every bit as much as Troy Smith in Ohio State’s 2007 game against Florida.

If they are still not convinced, they can check out his combine performance that failed to impress the coaches in attendance.

But that is apparently not enough for some people, as some teams reportedly are concerned about Te’o’s sexuality.

END_OF_DOCUMENT_TOKEN_TO_BE_REPLACED

With the start of free agency in the NFL just 16 days away, we are going to be hearing lots of talk about what the Cleveland Browns may or may not do to upgrade the roster.

And there is one question we are sure to hear asked in some form over and over again:

“Don’t the Browns have to spend 89 percent of the salary cap this year?”

The answer is no, they don’t. But for some reason the question keeps coming up, so let’s review the answer one more time:

No team in the NFL – and yes, that includes the Browns – has to spend 89 percent of the salary cap this year or any year.

END_OF_DOCUMENT_TOKEN_TO_BE_REPLACED

Ravens try to give away game, Browns say no thanks

It was there for the taking on Sunday against the Baltimore Ravens.

The Cleveland Browns just don’t yet know how to take it.

The Browns squandered a golden opportunity to get their first win in 10 tries against the Ravens, extend their home winning streak to three games, and go into the bye week having won three-of-four games.

The Cleveland Browns return home to take on the Cincinnati Bengals in the final game under the ownership of Randy Lerner.

Much has been made of the Browns losing 11 games in a row, primarily because that is really bad, but because they have come consecutively, it feels even worse.

“Our focus is to win the next game,” Browns coach Pat Shurmur said. “(The losing streak), it’s not a motivator. What’s a motivator is going out and winning a division game at home.”

Having proper motivation is a good start, but is that enough?

Find out at The Cleveland Fan.

The Cleveland Browns return to action on Sunday, heading to the Big Apple (well, the swamps of New Jersey) to take on the New York Giants.

The Browns are looking to avoid their first 0-5 start since the expansion year of 1999.

On paper, pretty much everyone is chalking this game up to the Giants. They are the defending Super Bowl champions, the Browns are 0-4, no sweat.

But there are matchups that the Browns could potentially exploit and the Giants are known to leg an egg or two each season (see their two losses to the Redskins last year).

The full preview starts … now at The Cleveland Fan.