What does 2014 have in store for the Cleveland Browns?

The Cleveland Browns open the 2014 NFL season on Sunday in Pittsburgh, a season that will see the Browns mark the 50th anniversary of their last (and Cleveland’s last) championship.

It was quite the offseason for the team, one that we’re sure fans and team officials are ready to put behind them. We’re all familiar with those storylines by now: the shakeup of the front office, yet another coaching change, the quarterback competition that kind of really wasn’t a competition, the prolonged case of Josh Gordon that ultimately resulted in a yearlong suspension.

But once 1 p.m. hits on Sunday, the Browns have the opportunity to put all that behind them and see what they can make of the upcoming season.

For the first time in far too long, the Browns appear to be in decent shape at the quarterback position. Brian Hoyer, in what is his best (and quite possibly last) chance to prove his is a starting quarterback, is a solid if somewhat unspectacular choice. While he struggled in the preseason, Hoyer looked good in his one series against Chicago.

Whether it was the lingering effects of his torn ACL, uncertainty in learning yet another offensive system, or the pressure of actual being in contention for a starting job for the first time in his NFL career, it wasn’t until the game against the Bears that Hoyer looked like the player we saw last season against Cincinnati and Minnesota.

For the first time in far too long, the Browns appear to be in decent shape at the quarterback position.

If the good Hoyer shows up on the field this season, the Browns will be better off than many people are expecting. If he doesn’t, well, we may see the launch of the Johnny Manziel-era sooner than we probably should.

With Hoyer not exactly grabbing the starting role with an iron grip, the opportunity was there for Manziel. But while he had his moments, it became clear pretty early that after just two seasons in college, Manziel was not ready to take over an NFL team. Luckily head coach Mike Pettine was able to tune out the bleating of a national media that wants Manziel to play for ratings, rather than wins, and make the right call on the Hoyer vs. Manziel issue.

Don’t get us wrong, it is only a matter of when, not if, Manziel takes over the starting role. But it is important to remember that the Browns didn’t draft him just for the opening game of this season, they drafted him for what hopefully will be an exciting 12-plus-year run as Browns quarterback. Manziel didn’t show enough during the preseason to warrant rushing him onto the field, so Pettine made the right call.

One last thing about the quarterbacks: we’ve heard far too much about a “Manziel package.” We would be just as happy if the offense would worry about correctly running the regular plays before they start worrying about special packages.

It is not all on the shoulders of Hoyer or Manziel, of course. The Browns revamped the entire running game in an attempt to avoid last season’s embarrassment.

Ben Tate represents the best running back, at least on potential, that the Browns have trotted out since Jamal Lewis in 2007. Just like Hoyer, Tate is out to prove that he can be the every-down running back the Browns need – especially when you consider that the alternatives are all rookies in Terrance West, Isaiah Crowell and Glenn Winston. West certainly looks like an NFL running back, and his game is one that resonates with Cleveland fans, but the fact remains that he only averaged 2.7 yards per carry during the preseason, so thinking that he is ready to take over for Tate is a bit of a stretch right now.

The Browns are going to need a strong running game because without the suspended Gordon, the receiving group is … problematic.

We’re still confident that tight end Jordan Cameron can step up his game this year, especially if he can redevelop the chemistry he showed with Hoyer last year. In the two games that Hoyer started and finished, Cameron had 16 receptions for 157 yards and four touchdowns – numbers that the Browns are most likely going to need on a weekly basis this season.

After Cameron, the options get pretty slim with Miles Austin and his 90-year-old hamstrings, and the group of Travis Benjamin, LaRon Byrd, Taylor Gabriel and Andrew Hawkins, a quartet that has combined for just 110 career receptions, with 86 of those coming from Hawkins. Here’s hoping that the sum of the group is more productive than the individual parts.

We’re still confident that tight end Jordan Cameron can step up his game this year, especially if he can redevelop the chemistry he showed with Brian Hoyer last year.

With all the changes on offense, the fact that the offensive line is mostly intact from last year has to be a plus. Rookie Joel Bitonio is the only new starter and he has to benefit from lining up between Joe Thomas and Alex Mack. The right side of the line is a bit more speculative, as John Greco needs to prove he is worthy of the contract extension that Joe Banner inexplicably gave him last season; and Mitchell Schwartz, entering his third year as the starting right tackle, needs to show everyone he is more than just the second coming of Tony Pashos.

Offensive issues aside, it is on defense that the Browns will make their mark. 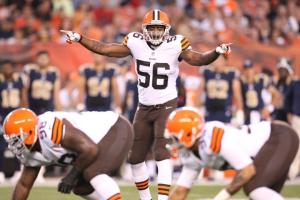 The team spent another off-season investing in the defense, using another first-round pick on Justin Gilbert, and signing Karlos Dansby and Donte Whitner in free agency. They have a solid defensive line rotation – especially is Desmond Bryant can stay healthy – a group of linebackers that could be exciting to watch – especially if Pettine can help turn Barkevious Mingo’s athleticism into consistent game day production – and a secondary that should be much improved over last season – especially as Gilbert starts to figure out the pro game.

Sure, that’s a lot of ifs for a unit that we expect to be the strength of the team, but what do expect from a team that was 4-12 last season?

The one area that Browns need to improve on the most this season is the one that, luckily, they are in complete control of: consistency.

Twenty different starting quarterbacks since 1999, seven fulltime head coaches, six different front offices and just as many offensive coordinators just in the past eight years. It has to stop now.

We’re still a little fuzzy on how Kyle Shanahan became the team’s offensive coordinator, but when the Browns committed to him they also committed to his zone-blocking philosophy on offense. If Shanahan craps out this season and is fired, the Browns need to replace him with someone who runs the same system. The same is true if Shanahan somehow turns the offense into a repeat of 2007 and gets a head coaching job after the season.

The Browns also need to stick with Hoyer for as long as they possibly can. Sitting him down just for the sake of playing Manziel will do no one any good. Let’s see if we can get through a season without riding on the quarterback carousel for a change.

We’re not as worried about the defense because, even though Jim O’Neil is the coordinator, he is running Pettine’s defensive system. Even if O’Neil is not on the staff next year for some reason, the Browns should be able to keep building on whatever progress they make this year.

Which brings us to the man himself: head coach Mike Pettine.

Unless the Browns go 0-16 and Pettine shows all the coaching acumen of a coach of the freshman team at the local high school, he needs to be given every chance to grow into this job. Now that we are on the cusp of the season, it is irrelevant how the coaching search went under Banner and Mike Lombardi; Pettine is here and he has the experience, temperament and philosophy that will play well in Cleveland and provide hope that he is the right man for the job.

For that to happen, though, owner Jimmy Haslam has to live with the growing pains and simply give Pettine time – time to get a system in place, time to work with general manager Ray Farmer on getting the right players on the team, and time to just learn what it takes and means to be an NFL coach.

Every time the Browns have made a change we have said the same thing: you can’t hold the news guys accountable for the mistakes of their predecessors, but you can hold them responsible for fixing the mess. That can happen with Farmer and Pettine, but only if they are given time.

Earlier this summer Pettine talked about the need for patience and he was right. It’s the four-letter word for Browns fans who have gone through all the misery, losing and general nonsense that has surrounded this team for the past two decades, but he is correct. This team isn’t ready to win yet, there are still too many questions to answer – but that doesn’t mean they can’t get the process started this fall by playing smart football and being generally competitive.

If they can do that and not go through another round of wholesale changes next offseason, the season will be a success no matter what the final record indicates.

Unless the Browns go 0-16 and Mike Pettine shows all the coaching acumen of a coach of the freshman team at the local high school, he needs to be given every chance to grow into this job.

As for the season itself, for the Browns to win we expect they are going to have to have plenty of games like their one in Week 3 of last season against Cincinnati. The defense will have to dominate while the offense remains efficient, if not great, for the Browns to have a chance most weeks.

After a rough stretch to open the year, the schedule turns a bit in the Browns favor. While they are certainly no lock to beat anyone, Tennessee, Jacksonville, Oakland, Tampa Bay, Houston and Buffalo are certainly not any better than the Browns and represent winnable games. And it certainly wouldn’t hurt anyone if the Browns started sticking up for themselves within the AFC North. And it would be beyond great if they took the brown pants out behind the practice facility in Berea and burned them. It’s hard to look and play like an NFL team if you are dressing like a team from the Western Athletic Conference.

As the season is still a few days away this is a time for optimism. We see the Browns getting better as the season moves along (and the schedule gets softer) and pulling off a surprise here and there. This team isn’t built to really win this year, so let’s go with a record of 7-9 and, armed with two picks in the first round of next spring’s draft, the momentum to really get this thing rolling in 2015.

The season – and a new era of Browns football – starts on Sunday at 1 p.m.

What the Browns do with it from there is all up to them.