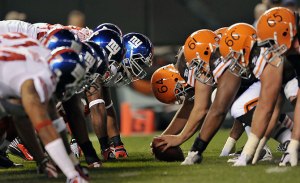 The Cleveland Browns return to action on Sunday, heading to the Big Apple (well, the swamps of New Jersey) to take on the New York Giants.

The Browns are looking to avoid their first 0-5 start since the expansion year of 1999.

On paper, pretty much everyone is chalking this game up to the Giants. They are the defending Super Bowl champions, the Browns are 0-4, no sweat.

But there are matchups that the Browns could potentially exploit and the Giants are known to leg an egg or two each season (see their two losses to the Redskins last year).

The full preview starts … now at The Cleveland Fan.