Archive for the category “AFC North”

Well, wasn’t that something special today? 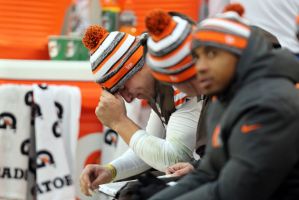 There are plenty of storylines to discuss following the Cleveland Browns disappointing 30-0 loss on Sunday to the Cincinnati Bengals.

We could talk about how a team that was once 7-4 now needs to win at least one of its final two games to avoid its seventh consecutive losing season.

Or perhaps we can examine how a defense that looked some dominant the past two weeks gave up 244 rushing yards and allowed Jeremy Hill to rush for 148 yards and two touchdowns.

Speaking of the running game, how about Isaiah Crowell rushing for all of 17 yards on seven carries? In his past three games, the Crow has rushed 38 times for a 2.6 yard-per-carry average. But he has a cool Twitter handle, so apparently all is good.

Maybe you’d be interested in looking at how, on the game’s opening drive, the Bengals were the beneficiaries of three questionable penalty calls – a non-call on a blatant hold against Paul Kruger, and two dubious penalties against the Browns on third downs that kept Cincinnati’s touchdown drive.

But let’s be realistic; there is only one story that needs to be discussed following what is unquestionably the Browns worse loss of the year, and that is the first start by rookie quarterback Johnny Manziel.

END_OF_DOCUMENT_TOKEN_TO_BE_REPLACED 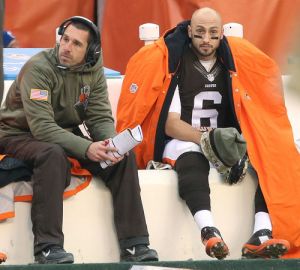 They did it again.

For the second time this season, the Cleveland Browns entered a game fresh off a big divisional win that had the team and its fans believing the club had finally, after all these years, turned a corner.

And for the second time, the Browns betrayed that belief and left a turd in the punchbowl.

This time it was a deflating loss to the Houston Texans that looked so much like a repeat of the Jacksonville game in October, almost down to the final score. Then, a week after beating Pittsburgh, the Browns fell to the Jaguars and Blake Bortles by the score of 24-6.

On Sunday, the Browns team that looked so good against Cincinnati had no answers for Ryan Mallett, who came into the game having thrown one NFL pass but somehow went 20-of-30 for 211 yards and two touchdowns in his first career start. This time, the Browns fell 23-7.

END_OF_DOCUMENT_TOKEN_TO_BE_REPLACED

Browns earn a second chance at a season to remember 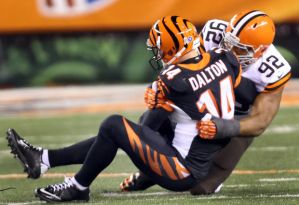 There are no guarantees of getting a second chance in the NFL, but when they occur teams need to be ready to capitalize on them.

That’s the situation the Cleveland Browns now find themselves in after their complete beat down of the Cincinnati Bengals on Thursday night.

The primetime win announced to the nation that the Browns are for real this year and tops the team’s previous big win of the season against Pittsburgh.

The win against the Steelers on Oct. 12 had the team and its fans believing a better day was finally here, but the Browns followed up that big day by falling flat the following week against Jacksonville.

Now the Browns have earned themselves a second chance after winning for the fifth time in the past six games.

END_OF_DOCUMENT_TOKEN_TO_BE_REPLACED 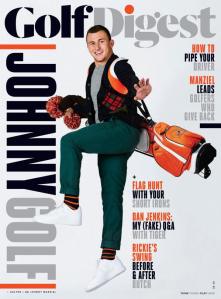 Every time we think we’ve finally hit the bottom of the media’s obsession with Cleveland Browns rookie quarterback Johnny Manziel, the media finds a way to drain a little more water out of that pool.

It’s one thing when Manziel appears on the cover of Golf Digest, that’s in some ways a commercial endorsement (albeit a rather unexpected one), so we get it.

But we were totally unexpected to see this “report” from ESPN’s Chris Mortensen that Manziel Tweeting out a phone number over the weekend was all a prank on a friend.

We’re not sure which is more unsettling, the fact that one of ESPN’s top NFL reporters felt the need to make this into a story, or that Mortensen had to resort to unnamed sources to “confirm” the existence of the prank.

END_OF_DOCUMENT_TOKEN_TO_BE_REPLACED 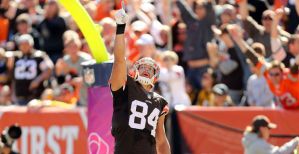 Who were those guys in the orange helmets on Sunday and what have they done with the real Cleveland Browns?

We’re sure that thought was going through the minds of a few Browns fans during Cleveland’s 31-10 beating of the Pittsburgh Steelers – and we know it was on the minds of the Steelers as they waited for the “same old Browns” to show up only to be bitterly disappointed.

The win was the biggest by the Browns over Steelers since the season-opener in 1989 and the biggest home win since 1987. The Browns have now outscored the Steelers, 55-13, in the last six quarters between the two teams.

“I don’t think anyone walked into this game on our team fearing playing Pittsburgh,” Browns quarterback Brian Hoyer said after the win. “I don’t know if that’s the mentality that has been around here for a long time, but it’s definitely something that’s growing. And you just got to continue to go out and build on that.

“I know how much it means for these players to beat Pittsburgh. They haven’t had great luck against them for the past however many years. To beat those guys and the fashion we did it, feels really good.”

It was a day that saw the Browns continue their transformation into a real NFL team and one that, come season’s end, we may look back on as a defining moment in the 2014 NFL season.

END_OF_DOCUMENT_TOKEN_TO_BE_REPLACED

Browns vs. Steelers – What to watch for in Week 6 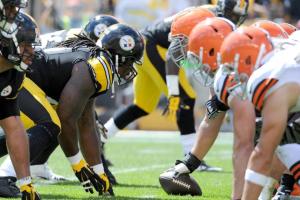 The Cleveland Browns return home today to face the Pittsburgh Steelers in what may me the most important game so far of the season.

After rallying last week against Tennessee to pull out the win, the Browns are looking to post consecutive victories for the first time in more than a year. Just as importantly, they are already 0-2 in the AFC North Division, so another divisional loss would make things exceedingly more difficult.

Today’s game also represents the second game in a five-game stretch where the Browns, while maybe not being favored, will at least be taking on a group of teams that are beatable.

“This is as big of a game in Cleveland in probably a while, just because of their record, our record, the rivalry that’s there,” Pittsburgh quarterback Ben Roethlisberger said earlier this week. “I anticipate it being a hostile environment, maybe like nothing I’ve ever seen up there before.”

But before they can start thinking about Jacksonville, Oakland and Tampa Bay, the Browns need to get by the Steelers, which is never an easy task for this squad.

Here are a few things to keep an eye on today as the Browns look to improve to get on the right side of .500 for the first time this season.

END_OF_DOCUMENT_TOKEN_TO_BE_REPLACED 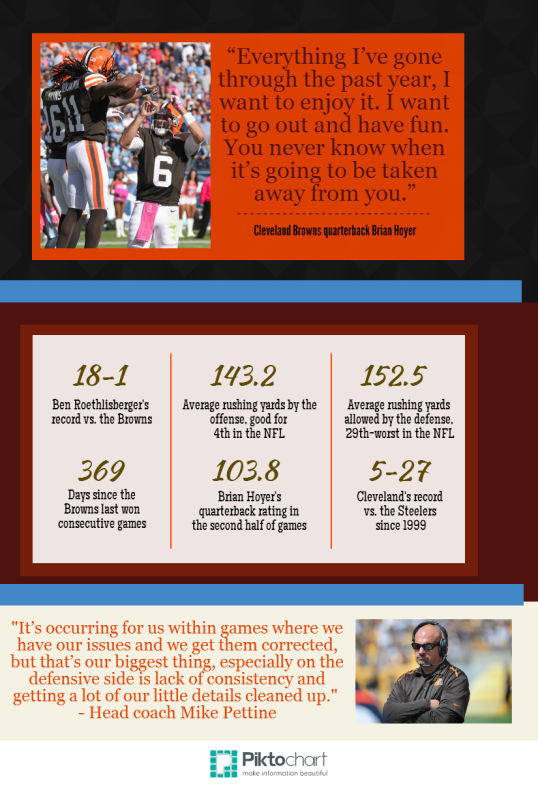 Browns stumble on transition from crawling to walking 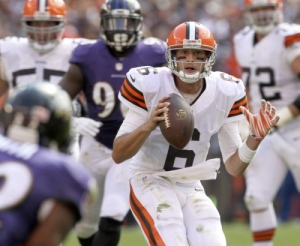 There was plenty of blame to around on Sunday as the Cleveland Browns saw their modest one-game winning streak come to an end at the hands of the Baltimore Ravens.

From miscues on offense that left points on the field, to lapses by the defense that led to big plays from Baltimore, to continued misplays by the special teams, this was a team loss in every sense of the phrase. Even head coach Mike Pettine got in on the fun, saying after the game that “we didn’t coach well enough to win today.”

So what went wrong? Let’s start with the offense, which for the better part of three quarters looked as good as it has all season long. The Browns put up three touchdowns – all in the red zone – against a Baltimore defense that had only given up one touchdown (none in the red zone) in the first two games of the season. In addition, quarterback Brian Hoyer had a stretch where he completed 14 passes in a row and avoided turning the ball over.

END_OF_DOCUMENT_TOKEN_TO_BE_REPLACED

Browns vs. Ravens – 3 things to watch in Week 3 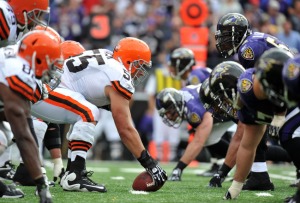 The Cleveland Browns return to action today feeling about as good as any 1-1 team in the NFL can.

The Browns are fresh off their first win in a home opener in 10 years after defeating New Orleans last weekend thanks to a timely play from linebacker Karlos Dansby and a game-winning drive from quarterback Brian Hoyer.

After heading into halftime of the Pittsburgh game down by 24 points, the Browns have looked relatively good over their last six quarters of play. So what could possibly go wrong today?

Oh, yeah, they are facing the Baltimore Ravens.

END_OF_DOCUMENT_TOKEN_TO_BE_REPLACED

A year later, much has changed for the Browns 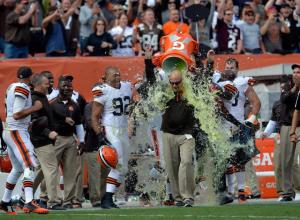 The NFL season is only two games old, but what a difference for the Cleveland Browns as compared to just a year ago.

At this time 12 months ago, the Browns were sitting at 0-2 after dropping games to Miami and Baltimore. Quarterback Brandon Weeden was hurt, and with the team realizing that Jason Campbell was not the answer no matter how many times they rephrased the question, the coaches turned to an unproven Brian Hoyer.

Wide receiver Josh Gordon had missed the first two games because of a league-mandated suspension, and both the offense and defense were working to learn new systems. (OK, it’s Cleveland; some things stay the same.)

The bombshell dropped during the week between the second and third game, however, when then-team President Joe Banner traded away starting running back Trent Richardson, turning the Browns running game into what statistically would be the worst in franchise history and effectively punting on the 2013 season.