It’s only one game, Browns fans 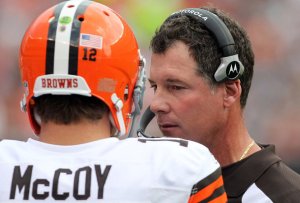 For any Browns fans still on the ledge, it’s time to get a grip and come back inside.

While Sunday’s loss to Cincinnati was certainly frustrating, it was still only one game.

More importantly, it was the first game under a new coaching staff, installing a new offense and new defense, with several new players, after a shortened off-season that kept the team from getting in the kind of work it needed.

There was certainly much to not like about Sunday’s game, but some of what went wrong can be corrected – starting with the penalties.

Ten penalties in the first half is unacceptable, but there’s no reason to believe it will continue. And blaming the penalties on the coaching staff is a stretch. Unless someone can find the play in the Browns playbook that calls for All-Pro tackle Joe Thomas to commit a false start, the players need to carry the water for the penalties.

“The three offsides penalties were from guys who had played a year ago, so who knows,” Shurmur said in his Monday press conference. “All I know is we’ve got to correct it and everybody in there today is going through that process.

“You practice it, you try to recreate those same situations. You usually get what you emphasize and that’s been emphasized and we have worked on using multiple cadences. It’s a little bit punitive when they jump off sides in practice, although you folks don’t seeing them running laps, we have ways that we take care of it. There is an emphasis there, a general execution that when it doesn’t happen you go back and you re-emphasize it because they didn’t hear enough the first time you do it again. Then you do it again and that is just part of it.”

And it’s curious that, with all the cameras CBS had at the game, there was never a replay of coach Pat Shurmur’s bizarre sideline penalty or the unnecessary roughness penalty on T.J. Ward at the end of the first quarter.

It’s also time to let go of the botched play on the A.J. Green touchdown reception. Somebody should have obviously called a timeout, but there’s absolutely no reason to think that something like that will happen again. And that play didn’t cost the Browns the game.

Don’t forget, the Browns had that same play in the offensive playbook the past two years – if the defense wasn’t ready the quarterback was supposed to call for the snap. Of course, former coach Eric Mangini just wanted the quarterback to fall forward for two or three yards and waste a down. Give the Bengals credit for actually running a play.

There are real issues we need to worry about, however, starting with the offensive line.

The right side of the line is still not very good and it’s starting to look like the coaching staff and front office made a mistake in thinking they could rely on Tony Pashos at right tackle. Pashos is a good player, but he’s given the team no reason to think that he can stay healthy and on the field. And, for now, Oniel Cousins and Artis Hicks are not exactly setting the league on fire.

“I think they both had some good plays and then there were some things where it makes it tough to say this guy is your starter right now,” Shurmur said. “As we move forward, we’ll still keep an eye on what’s happening with the left guard, but as we move forward you might still see a rotation over there at the right side.”

The wide receivers look like they are going to be a concern as well. The group only had six receptions (three by Mohamed Massaquoi; zero; again, by Brian Robiskie) and, like the right side of the line, didn’t show anyone why the team likes the current group.

The running game also looked like a concern, as Peyton Hillis and Montario Hardesty combined for just 75 yards on the ground. Twelve different players alone exceeded that number on Sunday. Much like last year, the Browns need to be able to run the ball if they are going to have any success on offense this season.

Houston ran for 167 yards on Sunday against Indianapolis, the Browns next opponent, so this week could give us a good indication of what the Browns can do in the running game.

Of course, this all ties together. The running game suffers because teams don’t fear the wide receivers and because the right side of the line is struggling. Basically, it’s all big, depressing pile of poo.

But in the big picture it is just one game in what is an ongoing production. The Browns need to figure out what went wrong on Sunday, work it out in practice this week and, come Sunday, just do their jobs.

“The important thing is for the guys to understand their mistakes and then talk about specifically how you are going to correct them,” Shurmur said. “Then you go to work beating the next opponent because it’s a long season. A lot has been made of the first game, but places I have been we have lost the first game or two and still been in the playoffs and you had a terrific years I think that’s the important piece is to keep the focus and move on.”

And, come Sunday at 4:15 p.m., if the Browns are walking off the field with a win over the Colts, everyone will forget what happened against the Bengals.