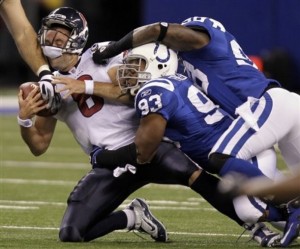 While everyone is ready to put the Browns Week 1 loss behind them, things won’t get much easier this week in Indianapolis, even if the Colts are without Peyton Manning.

Colts defensive ends Dwight Freeney and Robert Mathis would be a handful even if the Browns were healthy along the offensive line. But with right tackle Tony Pashos expected to miss the game this weekend, the task gets that much harder.

Joe Thomas should be able to hold his own at left tackle, but with him having his hands with whomever lines up opposite him, we have to wonder how much help he will be able to give rookie left guard Jason Pinkston.

“It’s funny because (Freeney’s) kind of known for the spin move and for his speed, but he’s one of the strongest players in the league,” Thomas said in published reports. “You see him picking up 330-pound tackles and throwing them on the quarterback.”

We’re more worried about Artis Hicks and Oniel Cousins, who will again split time at right tackle as the Browns continue to hope that one of them will seize the role.

“(They) are premier guys,” Hicks said. “They have a special skill set. We give them a chance to pin their ears back and get after the quarterback and they can be a nightmare. We have to keep out of those Freeney-Mathis killer downs.”

The best way to keep Freeney and Mathis from having an impact is to get the running game untracked, something the Browns were unable to do against Cincinnati.

“I feel like we’re set up here where we can run the football and be somewhat efficient, but we have to go do it,” coach Pat Shurmur said in his Thursday press conference. “Then we have to get the game in a situation where you can stay run/pass and I think that’s when you play the best ball. I believe in running the football, I think it’s important we do it and I feel we’ve got backs that can carry it.”

Let’s hope so, or it could be another long day.

We were surprised – and a little chagrined – how easy it was to put the Indians away for the season once it became clear the Tribe was finished.

As soon as the last out was recorded in Detroit’s sweep in Cleveland on Sept. 7, we pretty much checked out on the season, to the point that we didn’t even know what time the games start each night any more.

The start of the NFL season played a large role, but we were still surprised, especially after spending the summer months watching each game from the first pitch.

Cleveland fans, more than most, understand the reality of homegrown players leaving in free agency.

And we get the desire of most players to want to sign the biggest contract they can.

But we were still surprised to hear Prince Fielder talk so openly about how this is most likely his last year in a Brewer uniform – especially at a time when the Brewers are in first place and are trying to make the playoffs.

The part we don’t understand is the attitude that Fielder has no choice in all this – if he wants to stay in Milwaukee no one is stopping him. He won’t get as much money, but we’re sure the Brewers can come up with enough to last him at least this lifetime, if not a couple more.

Finally, it must be either extremely liberating or profoundly depressing – we can’t figure out which – to live your entire life blaming everyone else when you fail and never accepting responsibility.