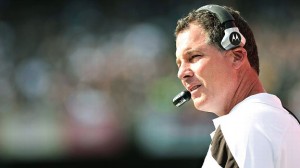 Repeat after us, Browns fans: it’s only five games.

Five games into the season. Five games that Pat Shurmur has been a head coach in the NFL. Five games into a season with a new offensive and defensive system that has been installed without the benefit of a full off-season program (think the Browns could have used the approximately 1,000 snaps of practice lost to the lockout?)

The hair-pulling has begun in earnest among Browns fans. Some have already hit the panic button, ready to bench the quarterback or fire the coach. Some revisionists are pining for the return of former coach Eric Mangini and his 10-22 record.

That’s the kind of thinking that, in the past, has put the Browns in the situation they find themselves in. That’s how you end up with:

The Browns have finally put the correct structure in place. Mike Holmgren, Tom Heckert and Shurmur are all pulling in the same direction, share the same idea on the offensive and defensive systems the team will play, and know the type of players that are required for those systems.

And they should blow it up after just five games? Why? Because the Browns are “just” 2-3?

We are fully convinced that the process the Browns are using is absolutely the right way to go. Everyone has a clearly defined role to play, everyone is working toward the same goal, the team is building around young players and draft picks; it’s all the right way.

Will the end result be one that Browns fans can cheer? That chapter still has to be written, maybe not for another two or three years.

Of the three, Heckert is really the only one who we know can perform his job in a capable fashion. The jury is still out on Holmgren and Shurmur. Mistakes can still be made, things can fall apart and, as we’ve seen repeatedly over the years in this town, just because you’re a decent coordinator doesn’t mean you have what it takes to be a good head coach.

What we don’t want is a repeat of 2007, where the combination of a few lucky bounces and a soft schedule created the mirage that was a 10-6 season. We don’t want the Browns to be the flavor of the month in the NFL – think San Francisco and Detroit this year – but rather a team that consistently competes for the division title.

More importantly, Holmgren is not firing Shurmur – especially after only one year on the job. It was easy to fire Mangini, Holmgren didn’t hire him. But Holmgren’s sucess as team president is tied to Shurmur’s success as head coach. If Shurmur fails, that means Holmgren failed in hiring him, so short of Shurmur doing something off the field to embarrass the organization, he’s not going anywhere for a few years.

The Browns need time to work this all out. This isn’t a game of Madden football – we can’t just continually hit reset if we don’t like how things are playing out.

When it comes to the current state of the Browns, we’re reminded of this phrase from the Cadet Prayer at West Point: “Make us to choose the harder right instead of the easier wrong.”

The Browns are currently taking the harder right. All we can do is go along for the ride and hope for the best.

To hear what Holmgren had to say today: Part 1 & Part 2