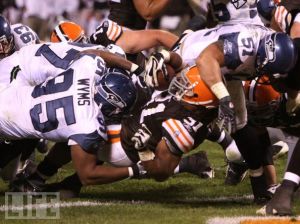 The Cleveland Browns return home on Sunday looking for their first win in almost a month as they take on the Seattle Seahawks.

The Most Memorable Browns vs. Seahawks Game We’ve Seen

That’s a tough one. When we think of the Browns playing the Seahawks we mostly think of Todd Philcox in 1993. We completely forgot about the game in 1994 where the Browns earned a playoff berth.

So we’ll go with the 2007 game where the Browns won in overtime.

Who knows with this Browns team anymore?

The standings say the Seahawks are not very good and they historically struggle when they have to travel East for 1 p.m. games.

Of course, they have played a far more difficult schedule than the Browns this year, having faced Pittsburgh, Atlanta, the Giants and San Francisco so far (combined record 16-8).

But if a team ever needed a win, it is the Browns after the week they’ve had.

Let’s take the Browns to win, but not cover, on a late Phil Dawson field goal.

Record picking the Browns (using the point spread) this year: 3-2-0.