These things tend to work themselves out 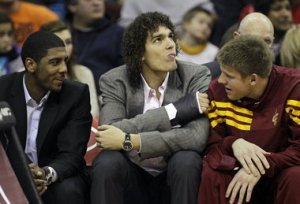 It was just a little over a week ago that Cavs fans found themselves in quite the contretemps: would it better if the team made the playoffs, even as an eighth seed, or would the Cavs benefit more from another high lottery pick?

Well, as what generally happens in these situations, things worked themselves out, as first Kyrie Irving went down with a concussion that has forced him to miss the past three games, and now Anderson Varajeo will miss at least a month after fracturing his wrist Friday night against Milwaukee.

So, for the foreseeable future, we will get a steady diet of Semih Erden, Ryan Hollins and Samardo Samuels in the pivot, starting Wednesday night when Erden gets the start against Indiana.

“I gotta give him a chance,” Cavs coach Bryon Scott told The Beacon Journal. “I think (Hibbert) is a great challenge for him. I’m hoping that last game was one of those where he felt (depressed) for Andy, because a lot of our guys did. And this game he’ll look at as ‘I’ve got a golden opportunity here. I better try and take advantage of it.’ ”

Seeing Erden, Hollins and Samuels get extended minutes will have a negative impact on the Cavs record, which in the long run is fine. The Cavs are more than just one player away from being a legitimate threat in the playoffs, so picking up a higher draft pick will benefit the team more than a short stay in the playoffs.

This season is all about getting game experience for youngsters Irving and Tristan Thompson, and moving the team further away from the stench of last year’s 19-win effort. Wins are nice, but secondary to the bigger picture.

“Those things always play in the back of your mind,” Antawn Jamison said in published reports. “You just have to think positive that we won’t have a repeat of last year. Just go out and play with the type of passion that you normally play with and just hope for the best.”

And for the most part it’s been a good season. Even in (most of) their losses, the Cavs have been entertaining to watch. Unfortunately there is a chance that could change with Varajeo out, especially if the team moves Jamison and Ramon Sessions near or at the trading deadline next month. We’d hate to see the team go back to being the unwatchable mess it was at times last season.

On the good side, though, is it looks like Irving may be ready to go when the Cavs take on Indiana on Wednesday.

“I’m hoping I get him back Wednesday, but if not, I’m also trying to prepare for the worst,” Scott said. “If he doesn’t, we know we’re going with Sess (Ramon Sessions) and the other guys we have and we’ll go from there.”

While it may not be how Scott wanted the next few weeks to play out, the Cavs will be better off in the long run.

While we don’t want to get too excited about the ongoing mess in Pittsburgh, it’s fun to see the Steelers squirm and bumble their way through the first month of the off-season.

Te team hired the abrasive Todd Haley as offensive coordinator, not because he was the best coach for the job, but reportedly because the Rooney family wanted to do a favor to the son of Dick Haley, who spent 44 years with the team as a player and then in the front office.

And they did it over the protests of coach Mike Tomlin.

We’re sure Steeler fans just love a hands-on owner who injects himself into football decisions.

Finally, Liverpool’s Luis Suárez and manager Kenny Dalglish apologized for their roles in the handshake nonsense on Saturday at Old Trafford after the team’s owners, Fenway Sports Group, got everybody in line.

“I have not only let (Dalglish) down but also the club and what it stands for and I’m sorry. I made a mistake and I regret what happened,” Suárez said, according to the BBC.”I should have shaken Patrice Evra’s hand before the game and I want to apologise for my actions. I would like to put this whole issue behind me and concentrate on playing football.”

“We are extremely disappointed Luis Suárez did not shake hands with Patrice Evra before yesterday’s game. The player had told us beforehand that he would but then chose not to do so. He was wrong to mislead us and wrong not to offer his hand to Patrice Evra. He has not only let himself down but also Kenny Dalglish, his team-mates and the club. It has been made absolutely clear to Luis Suárez that his behaviour was not acceptable.

“Luis Suárez has now apologised for his actions which was the right thing to do. However, all of us have a duty to behave in a responsible manner and we hope that he now understands what is expected of anyone representing Liverpool Football Club.”

It’s good that the team finally stood up and told Suárez that what he did was wrong and that he needs to grow up.

Only time will tell if he got the message. And it’s probably a good thing that Liverpool and Manchester United won’t play again until next season. Suárez’ actions on Saturday only put more fuel on an already heated rivalry that we would hate to see turn ugly (or uglier).
(Photo by The Associated Press)