The good, the bad and the fixable 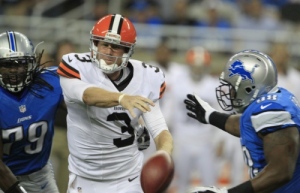 The Cleveland Browns opened the 2012 NFL preseason with a 19-17 win over the Detroit Lions.

“Regardless of whether or not they count, it is always more fun to win,” Cleveland coach Pat Shurmur said in published reports. “I told our guys that, and they made some plays to put us in position to do that.”

Fun is a relative term, of course, and we’re not sure watching the game Friday night was what we would consider as fun. But it was a preseason game, so you have to go into the experience with a lower level of expectations.

The Browns did some good things, some bad things and some things that they better hope are fixable in time for the Sept. 9 season opener against Philadelphia.

Rookie wide receiver Travis Benjamin made a nice catch along the sidelines in the first quarter for a 34-yard gain.

“Travis looked in this game like he’s looked in practice,” Shurmur told The Plain Dealer. “I think that’s an encouraging thing because he’s been able to bring it to the game. He looked fast on the returns and he caught the ball well and caught it with his hands.”

In three series against Lions quarterback Matthew Stafford – who threw 41 touchdowns passes last season and for more than 5,000 yards – the Browns didn’t give up any points, and cornerback Sheldon Brown picked off a Stafford pass.

“I had to cut it loose earlier than I wanted to,” said Stafford, who was being pressured by defensive end Emmanuel Stephens.

Colt McCoy is a pretty good running back as he was second on the team with 20 yards rushing. Too bad he’s a quarterback.

Brandon Weeden played like a rookie quarterback seeing his first NFL action. Weeden completed 3-of-9 passes for 62 yards and hit the trifecta with a sack, an interception and a fumble.

“I felt in complete control, and I told you guys that the other day that was my main focus was feeling in control,” Weeden told The Beacon Journal. “Yeah, the numbers aren’t great, but I didn’t really expect them to be. I knew I was going to make some mistakes here and there, but it’s just how can we fix those mistakes, what can we do to make them better, not do them again and go forward.”

“I thought Brandon did a good job,” Shurmur told The Plain Dealer. “It looked like the game was slow for him. He was out there and he executed pretty well. I think he would want that one back on the interception. It was in tight coverage. The ball was a pretty good ball and we’ve got to make that play.”

With Trent Richardson out with a knee injury, Montario Hardesty ran for 16 yards on four carries and Chris Ogbonnaya had 27 yards on seven carries. In other words, the Browns run game looked just like last year’s running game.

Mitchell Schwartz played like a rookie tackle seeing his first NFL action. Schwartz had a false start and was beaten by defensive end Willie Young, with Young forcing Weeden’s fumble.

“I’ve got a lot of stuff to work on,” Schwartz told The Beacon Journal. “I think (I allowed)  too much pressure. (I’ve) just got to keep getting better, stuff that I think is more of a physical nature where you can clean it up in practice with better technique, better pass sets, better hands.”

In addition, wide receiver Mohamed Massaquoi was hurt on the Browns first offensive play when, after catching a 12-yard pass, he was hit in the helmet by free safety Erik Coleman.

“I’m always concerned about injuries, and I think he’s gonna deal with this and we’re gonna go through the process,” Shurmur told The Beacon Journal. “And when he’s healthy enough to play, then we’ll put him back out there and not before that.”

Rookie wide receiver Josh Gordon didn’t catch any of the three balls thrown his way and looked like someone who hasn’t played a game in two years.

The rush defense gave up 198 yards and six yards per rush to the Lions.

“We obviously have to do a better job of stopping the run,” Shurmur told ESPN Cleveland. “But this game is about preventing a score. To some extent, it was like last year (when the Browns finished 30th against the run but 10th in scoring defense).”

The Browns had eight penalties (seven in the second quarter) – but somehow the Lions were only called for one penalty for the entire game.

Now that they have seen their first game action, rookies Weeden, Schwartz, Gordon and company know what to expect. They will also get better as they continue to work on things in practice and continue through the preseason (at least that’s the plan).

The defense was playing without D’Qwell Jackson, Ahtyba Rubin, Frostee Rucker and Marcus Benard, all players the Browns are counting on this season. Getting them back on the field will certainly help.

Regardless of the quality of officiating, Shurmur needs to do something about the penalties.

“We had a lot of rookies in there playing with a team that went 10-6 last year, and I’m not down at all,” Shurmur told The Plain Dealer. “A lot of young guys had an opportunity to play.”

The next opportunity comes Thursday against Green Bay.

Hopefully the Browns fix some things by then.