Kent State in the Sugar Bowl? Hey, it could happen 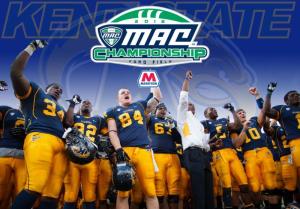 Kent State is currently ranked No. 17 in the latest Bowl Championship Series standings heading into Friday night’s MAC Championship game in Detroit. Win against Northern Illinois and the Golden Flashes just might find themselves in a major bowl game for the first time in school history.

“I’m not going to talk about that,” Hazell said. “I’ll talk about Northern Illinois. That’s the most important thing. If we don’t focus on this game, we won’t have those opportunities. This is a huge game for our university.”

And Hatch, the senior senator from Utah, will have played a small role because he was the leading complainer in 2004 and 2008 after the University of Utah went undefeated but was denied a BCS bowl spot. Hatch used the federal government to sue the BCS, forcing the organization to change its rules. (That almost makes up for the fact that Hatch is now working to deny people one of their basic human rights as he wants to repeal Obamacare. Almost).

Now, under BCS rules, the MAC champion is one of a handful of conferences that earns an automatic bid in a BCS bowl game if they are ranked in the top 12 of the final BCS standings or in the top 16 if its ranking is higher than the winner of one of the automatic berth conferences (the ACC, Big East, Big Ten, Big 12, Pac-12 and SEC).

One of the teams sitting in front of Kent State is UCLA, which will face a rematch in the Pac-12 title game with Stanford, which just rolled over the Bruins last week. Kent State is also already ahead of both Rutgers (which the Golden Flashes beat this season) and Louisville so they don’t have to worry about the eventual Big East champion (not that anyone should worry about Big East football).

So, win on Friday and the Golden Flashes could receive an invite to play in the Sugar Bowl on Jan. 2, most likely against the University of Florida.

And to think that, just a couple of days ago, we would have been OK with the GoDaddy.com Bowl.

There is also the possibility that Kent could get selected by the Orange Bowl, as Jacob Rosen points out at WFNY. Of course, for that to happen Sugar Bowl officials would have to make the decision to select a basketball school (Louisville) or a school that no one (not even their own fans) wants to watch (Rutgers) over what is sure to be America’s team, the scrappy underdogs who broke a 40-year descent into the depths in Kent State.

Getting by the 19th-ranked Huskies won’t be easy, though. Both schools were undefeated in conference play this year, and Northern Illinois is the defending MAC champion and is making its third consecutive trip to the conference title game. The Huskies have won 11 consecutive games, including eight of their last nine by double digits.

Kent State has lost five straight – and nine of 10 overall – to Northern Illinois.

But the Huskies don’t have Dri Archer, who leads the nation in kick return average, is fifth in all-purpose yards, tied for ninth in scoring and is Kent State’s single season record-holder in touchdowns with 21. We can’t wait to see what Archer can do on the indoor turf of Ford Field.

There is still a lot of work to do for the Golden Flashes before they can start dreaming of Bourbon Street, and just talking about Kent State and a major bowl is pretty amazing. (And the thought is already starting to irritate the college football world, which is always fun).

But if the Golden Flashes can pull it off, just imagine how sweet it would be.