The curtain drops on the Big Show in Cleveland 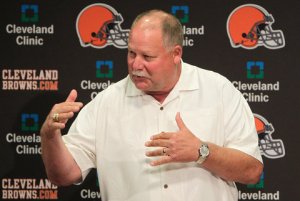 The Mike Holmgren era has officially come to a close, with Holmgren announcing that Friday will be his last day on the job as “official” president of the Cleveland Browns.

Holmgren has been unofficially off the job ever since Joe Banner took over as CEO (some would say he’s been off since being hired by former owner Randy Lerner almost three years ago).

“This is a great football city,” Holmgren said. “All of the things I said in my opening press conference came true in that way and I fully expect the team to do great things in the future. Those who have been covering the team for a long time can really enjoy it.

“When I watch the Cleveland Browns play on television in the future, I’ll take great pride when they do well. I’ll feel good about that. I’ll feel good for the players. I’ll feel good for the coaches, the organization and the people because I was here. When I went to Green Bay, I was a California kid. You have no idea what it’s like there until you work there. You think you do, but you don’t and it’s the same thing here. I am very thankful that I got this opportunity.”

While Holmgren couldn’t deliver a winning team – and how realistic was it to think that 11 years of complete ineptitude as a franchise could be fixed in three years is a valid question – the team is better than when he took over. He brought structure to a dysfunctional franchise and now the Browns at least appear to be an NFL team, with a functioning general manager, a coach (we’ll leave it up to you to decide how functional that position is) and, most importantly, everyone knowing their roles within in the organization.

Could Holmgren have done more? Of course; when you are a perennial five-win team then there is obviously more work to be done. Some of that falls on former owner Randy Lerner, though. Once Holmgren brought order to the front office, he really didn’t seem to know what to do next and Lerner should have given him some clear instruction on what his job was (of course, if Lerner did that the Browns may not be in the situation they find themselves in today).

It’s pretty obvious – at least in Cleveland – that Holmgren missed on hiring Pat Shurmur as a first-time head coach (although we have no idea what the national media is thinking) but he seems to have made a solid hire in general manager Tom Heckert.

And while many will criticize Holmgren for the tone he took with the Cleveland media, that never bothered us, especially since too many media members felt entitled and treated Holmgren like he was hired to be at their beck and call. Or else they assumed he would coach the Browns and felt betrayed when their assumptions went unfulfilled.

In the end, the Browns didn’t win enough and it is probably for the best that Holmgren moves on. He is a direct tie to Lerner and exorcising another link to the Lerner era can only be a good thing.

A day later and it’s fun to hear the Browns talk about a game where they actually beat the Steelers.

“It’s a great accomplishment. This is a team that we struggled against in the past and to come in and have a close-fought game like this and come out on top it’s a great confidence booster for this team.”

“It feels great, especially for the rookies,” said tight end Jordan Cameron. “They are 1-0 against the Pittsburgh Steelers. The defense did awesome today. Definitely, all those turnovers they created were just huge so I’m happy for our guys. It was a great week preparation so it was a great day.”

“It was everything I thought it would be,” said running back Trent Richardson. “I knew it was going to be a lot of smash mouth football, emotional game for a lot of the veteran players and for our young guys. We’re just getting into it but we do understand a rival game is a rival game, no matter where you are.”

As good as it feels to see the team finally beat the Steelers, imagine what it will feel like if the Browns can’t beat Oakland on Sunday and actually have a winning streak?

Not so great is the early news on quarterback Brandon Weeden, who may miss the Raiders game after suffering a concussion against Pittsburgh.

“Each player is different and I’ll know way more about this Wednesday when we start practicing,” Shurmur said. “Each situation, this time of year, is different. There are guys that can practice throughout the week and really, still not be ready to go. Then, there are guys that do very little early in the week, a little in the end and are ready to go. We’ll just have to see.”

To be able to play, Weeden must be cleared by the Browns the team physician as well as an independent neurologist. The fact that the Browns play on the West Coast, rather than at home, for their next game may also factor into the decision. As Jamison Hensley points out at ESPN, some doctors recommend that people who have suffered a concussion should avoid flying for two weeks.

If Weeden can’t go, then the Browns will turn to Colt McCoy.

“I’ve got all the confidence in the world in Colt,” Shurmur said (well, that makes one of us). “He’s handled his situation this year in a very positive way.”