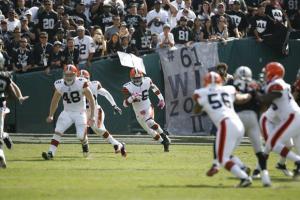 Fresh off their win against the Pittsburgh Steelers, the Cleveland Browns head west to take on the Oakland Raiders.

The Browns are still looking for not only their first road win since Week 2 of last season, but their first winning streak since Weeks 2 and 3 of last year.

The game against Oakland is the first of a three-game stretch that includes Kansas City (currently 1-10) and Washington (5-6) against teams that are nearer the Browns in ability. If the Browns can take care of business, suddenly things look better than they did when the team started the season 0-5.

Lose during this stretch and … well, let’s not think about that right now.