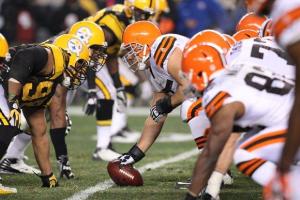 The Cleveland Browns head to Pittsburgh to take on the Steelers in the final game of the 2012 NFL season.

Thaddeus Lewis, who has never taken a snap at the NFL level, will start at quarterback for the Browns, with Brandon Weeden and Colt McCoy both out with shoulder injuries.

And Lewis won’t have Trent Richardson to hand the ball to, as the rookie running back will miss the game with an ankle injury.

Yeah, this is going to be some kind of party.

And it is one of those weeks where we are thankful for NFL Sunday Ticket.