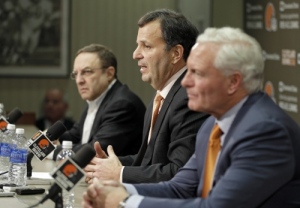 A new regime and a new era in Cleveland Browns football.

But in so many ways, it’s still business as usual in Berea with Friday’s announcement that the Browns had hired Mike Lombardi to serve as vice president of player personnel.

The week was coming to a nice close for the team with the announcement that new coach Rob Chudzinski was filling out his staff with offensive coordinator Norv Turner and defensive coordinator Ray Horton, while retaining offensive line coach George Warhop and special teams coach Chris Tabor.

While those may not be the kind of moves that win the off-season headline game, the fact that Chudzinski is building a solid, legitimate NFL staff should be encouraging for fans.

Then came Lombardi – who has been out of the NFL since 2007 and whose track record can best be described as dodgy– sucking the enthusiasm out of the room. The hiring has been reported as a done deal for months, which makes us wonder just how much effort that Banner put into the search and if the Browns ever had any intention of hiring someone else (much like how Holmgren was always apparently going to hire Shurmur).

Lombardi, for his part, said he’s changed and grown since he was last working in Berea during the Bill Belichick years in the 1990s. (Of course, what else is he going to say?)

“I am really excited to show that I can do the job effectively, that I will be the person that can help add to the team, can help build the football team and be part of a winning team,” Lombardi said during the press conference announcing the hiring. “When we left in ’96 after the team moved it was as heartbreaking for me as it was for all of you in this room and I think we’ve all grown from those days. I know I have and I think our careers have all grown. I think I stand in front of you different in terms of professionally and personally and with more passion than ever.

“We change the way we scout, we change the way we believe things. Football teams change. I think change is good. If I was the same guy that was here 20 years ago, I would say that Jimmy and Joe shouldn’t have hired me, but you have to change and you have to grow intellectually, personally. I think it’s important. It’s in that change that you separate yourself and keep yourself with pace. I think it’s really important. I view change as good.”

During his first stint in Cleveland, Lombardi worked with Belichick to draft one Pro Bowl player from 1991 to 1995 (out of 40 total draft picks). Most notably, he was part of the group that panicked during the 1995 draft after Jacksonville selected tight end Kyle Brady, the player the Browns wanted, one pick before Cleveland’s selection.

Having no backup plan, the Browns traded all the way down to the end of the first round and selected linebacker Craig Powell, who did nothing in three years in the league. (Although one could also make a case for Tommy Vardell as the poster child for bad Lombardi ideas).

More recently, Lombardi claimed the Joe Haden was “too slow” to play in the NFL and that the Browns wasted a draft pick on Josh Gordon.

Some will say that it doesn’t matter what Lombardi wants to do because the Browns have retained the scouts hired by Heckert. But if you don’t listen to your scouts on draft day (see Butch Davis selecting Gerard Warren over Richard Seymour) then what good are scouts? (And if the scouts are that good, why, exactly, did the Browns fire Heckert?)

So why is it going to be different this time?

“You can dissect things because there are always some things that you get right and wrong, but the team clearly improved during the time that Mike was here,” Banner said (no, the Browns did not improve). “And as I’ve said, I’ve been talking to him for years and gone into drafts and have a pretty good sense of who he liked and who he didn’t like, where his opinion was the same as the conventional wisdom and where he was stepping out with a different opinion. I can just tell you, I’ve spoken with and spent a lot of time with some excellent talent evaluators in this league and there’s no question when it comes to that, he’s near or at the top of the quality of talent evaluators that exist in this league.”

After hearing fans bleat for so many years about how Holmgren and Lerner “had to talk to the media” we’ve already grown tired of hearing Haslam and Banner speak, mainly because you can’t believe anything they say.

We don’t mean that they are blatantly lying, but rather Haslam and Banner are doing what every executive does across the league, which is to stick to a standard list of quotes about how every hire is the best person to turn the team in the right direction. It’s pretty pointless and why we were never bothered that Holmgren and Lerner did not speak more frequently.

But there is one thing that Haslam said during the press conference that we have to call shenanigans on.

“As we started to focus on this, I had the opportunity to talk to several people in the business who I respect,” Haslam claimed. “These are people at the very top of the NFL business, the most respected people in the business and without exception every one of them said this, ‘If you can get Mike Lombardi to be your general manager you should hire him immediately.’ ”

Sorry, but that is the biggest load of horseshit we’ve heard in a long time (and makes it sound like one of the people Haslam talked to was announcer Jim Nantz). There is absolutely no conceivable way that, if someone, somewhere, in the NFL wanted to hire Lombardi in the past five years they would not have figured out a way to do so. And we can’t shake the feeling that the Steelers and Ravens are having a good chuckle over this hiring.

“We didn’t worry about that at all,” Haslam said about Lombardi’s history. “I’ll be honest. I think I’ve said on numerous occasions every decision we make is not going to be popular. I have the upmost confidence that Mike is going to help us put together a winning team. If he does that, that’s all that matters. That did not play into our decision at all. We spent a long time with Mike two or three days ago. Rob got to spend time with him and the two of us came away convinced, Joe had spent time with Mike before, obviously, that this was the right guy.”

The Browns can’t let the fans run the franchise, obviously. They can ask fans about what kind of food or beer to serve at the stadium, maybe a uniform question, but not about the hiring or firing of personnel. But to come across as so tone deaf about someone’s qualifications does leave us questioning just what the team has gotten itself in to.

On the plus side, the team made solid hires in Turner and Horton.

While a mediocre head coach, Turner is a solid NFL coordinator, easily the best offensive coordinator the Browns have had since Lindy Infante was working the sidelines at the old Stadium (sorry Chud).

Turner clearly knows how to coach running backs after working with Emmit Smith in Dallas and LaDanian Tomlinson in San Diego. Five times the NFL’s leading rusher has been a part of Turner’s offense, which should make Trent Richardson one happy camper.

Turner also likes the vertical game, which hopefully means we’ve seen the last of the three-yard pass on third-and-five.

“Norv has been one of the most respected offensive coaches in the NFL over the last 25-30 years, and he has had a tremendous amount of success at each one of his stops – as a position coach, coordinator and head coach,” Chudzinski said. “I was able to learn a great deal in the time that I worked for him in San Diego, and I expect that having him as our offensive coordinator will make a big impact on that side of the ball.”

Needless to say, this is a step up from the offenses Browns fans watched under former coordinators like Mo Carthon and Brian Daboll.

As for Horton, he is a former defensive coach with Pittsburgh and spent the past two seasons as defensive coordinator in Arizona.

This year the Cardinals’ defense led the NFL in passer rating allowed and interception percentage, ranked second in the NFL in interceptions and third-down efficiency, ranked third in red zone defense, and fourth.

“We are truly excited that we were able to get someone of Ray’s caliber as our defensive coordinator,” Chudzinski said. “He possesses a great deal of experience as a player, position coach and coordinator in the NFL and has been part of some of the top defenses in the league throughout his career. He is an extremely talented coach and I know that he will work very well with the young nucleus of players we have on defense.

“With the additions of Ray and Norv (Turner), and also by retaining Chris (Tabor) we believe we have outstanding leaders and teachers in each of our three phases. I feel as though we are off to a great start in our plan of putting together an outstanding coaching staff.”

We can’t expect the Browns to hit on all of their hires and maybe it’s enough that it looks like they’ve made the right call with Turner and Horton. The goal when hiring new people is to make sure they are an improvement over their replacements. In Chudzinski and Turner that seems likely; at worse, Horton is a wash with former defensive coordinator Dick Jauron (although in truth he’s probably an improvement).

But it’s hard to see where the Browns have improved in selecting Lombardi over Heckert. Maybe, if Banner and Haslam send Lombardi out for beer and pizza on draft night, the way former coach Eric Mangini did with former general manager George Kokinis, things will work out OK.

And just as we can’t hold the current regime responsible for the sins of the past regimes, maybe we owe Haslam and Banner the benefit of the doubt on Lombardi.

After all, they received some criticism for hiring a first-time coach in Chudzinski while taking a pass on experienced head coaches in Ken Whisenhunt and Lovie Smith, but that decision looks better in light of the fact that no other NFL team hired Whisenhunt or Smith either.

But we still kind of wish we didn’t have to find out.