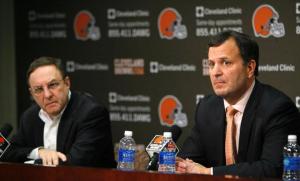 It may have taken longer than we would have liked, but Cleveland Browns owner Jimmy Haslam finally made a move on Tuesday to fix the biggest mistake of his tenure with the team.

In relieving CEO Joe Banner of his duties and replacing general manager Mike Lombardi with Ray Farmer on the football side, Haslam sent a clear message that it is time to stop hoarding salary cap money and draft picks and start putting the Browns back on the right path.

“The purpose of these moves is to unify our team with one, unequivocal goal: Provide our fans with the winning organization they have long deserved,” Haslam said in announcing the moves.

That quote right there should fill Browns fans with hope that a better day is coming.

Lombardi was a mistake from the day he was hired, both for professional and PR reasons.

There was not a single team in the entire league that was willing to let Lombardi anywhere near their personnel department – he hadn’t held a position with a team since 2007 – but Haslam let someone talk him into hiring the one person that was sure to divide and agitate an already fragile fan base.

From a PR standpoint, the hiring made no sense as Browns fans old enough to remember Lombardi’s track record from his previous time in Berea in the 1990s. It was a performance that certainly did not warrant a second act; thankfully Haslam dropped the curtain before Lombardi could do any long-lasting damage to the franchise.

As much as Lombardi was wrong for the job, Farmer comes across as being the right person – even though this will be his first shot at being a general manager.

Where Lombardi is divisive, Farmer is well-respected in the NFL. Where no one wanted to hire Lombardi, Farmer has long been considered a GM in waiting. Now he gets his chance as he will be in charge of the draft, free agency and the final makeup of the 53-man roster.

“The idea in my mind is to get Cleveland back to a championship-level football team,” Farmer said at his introductory press conference. “We need to get away from the negativity and get to the point where people are proud of the Cleveland Browns and what the organization stands for.”

As for Banner, we never found him as onerous as other people did, which makes the move to replace him a little bit more of a surprise. But Banner was heavily involved in the personnel side of the Browns, something he wasn’t really qualified to do.

And Banner’s involvement with the Browns came about because the NFL recommended him to Haslam with the thought that, as a new owner, Haslam would need an experienced hand to guide him.

But Haslam apparently now believes he’s learned enough that he can move on from Banner, especially because the team has Scheiner in place.

Just like Farmer, it’s hard to find anything negative out there about team president Alec Scheiner, who will remain in charge of the business side of things in Berea. And that is a relief after the past few years in Brownstown.

The biggest surprise in all of this – other than the thought that Haslam may have finally gotten this all right – is the timing of the decision to move on from Banner and Lombardi. We will probably never know for sure, but it seems like something must have happened to force Haslam’s hand, especially since the front office seemed in unison when they announced the firing of head coach Rob Chudzinski on Dec. 29.

The only negative that comes out of today’s news is that it will continue to be open season on the Browns from Lombardi’s friends in the media. And, sure enough, Jason La Canfora at CBS Sports fired the first shot.

It will be interesting to see how this team that Haslam has put together works out as it is filled with young guys, most of whom are getting their first shot in their current positions. Farmer is 39 while Scheiner is 41. On the coaching side, head coach Mike Pettine is 47, defensive coordinator Jim O’Neil is 35 and offensive coordinator Kyle Shanahan is 34.

It could all blow up in his face, but the Browns now have football people running the football side of the ledger, and business people on the other side. If these guys all grow into their jobs together, we could be entering an exciting time for Browns football.

And that’s the most important part. It doesn’t matter how they got to this point, or that Haslam may have previously hired people who were not qualified for the job. He’s fixed his mistakes and the only thing that matters is what happens next.

If the Browns do well in free agency, even better on draft day, and start winning this fall when it matters, no one that matters will care about what happened over the past six weeks.

Haslam obviously had grown tired of having Banner and Lombardi in his ear and decided it was time to bet on himself.

It may be because we are tired of all the nonsense that has surrounded the Browns for the past few months. Or maybe it’s just that we know with complete certainty that Haslam made the right move in getting rid of Lombardi. But we’re ready for the Browns to become a viable football team again.

And judging from what went down today in Berea, we’re ready to buy whatever Haslam is selling.