This Irving kid just might be a keeper for the Cavs 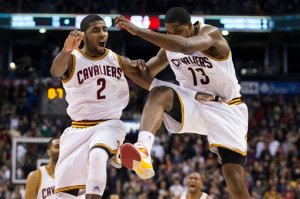 Cleveland Cavaliers point guard Kyrie Irving was named the Eastern Conference Player of the Week on Monday, which should come as no surprise to anyone who watched the Cavs play last week.

In helping the Cavs to a three-game winning streak, Irving averaged 35.7 points per game, 4 rebounds, 4 assists and 1.7 steals. He scored more than 30 points in all three games, becoming just the fifth player in NBA history to have three consecutive 30-point games before his 21st birthday.

“This has been a very good week for our team,” Irving said in an understatement on the team’s website. “We’re working hard and making progress. While I’m honored to win the award this week, the most important and exciting thing is our success as a team and continuing our focus to keep getting better every day.”

“He’s had one of probably the best weeks of his life,” Scott told The Plain Dealer. “He got named to the All-Star team, was Athlete of the Year in Cleveland, then he goes out and averages about 35 points. So he’s had a pretty good week.”

In other words, Irving is no Derrick Williams.

Irving capped off a week that started with a 40-point effort against Boston by hitting the game-winning three-pointer on Saturday night against Toronto. Along the way, he firmly stamped the Cavs as being his team.

“That’s what leaders do,” Tristan Thompson told The Plain Dealer. “We have the utmost faith in Kyrie, and we know whatever play he makes is going to be the right play. We were ready for him to end the game, and he made a tough shot. We just feel good especially when the game is on the line, and we know we have someone to turn to that is going to make plays, or make a shot or create something for someone else. Especially with a young team, it is definitely important.”

And with Boston’s Rajon Rondo suffering a torn ACL on Sunday, Irving may be the front-runner to start at point guard for the East in the All-Star game on Feb. 17 in Houston.

On the season, Irving is sixth in NBA in scoring at 24.2 points per game, good for third among all guards – trailing just Kobe Bryant and James Harden.

Not bad for someone who’s only played 85 games at the NBA level.