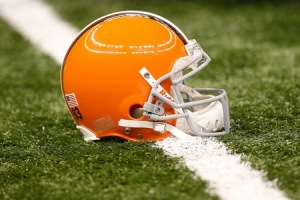 “I thought to myself, ‘well why would I do that?’” he said in published reports. “Candidly I haven’t done anything wrong number one. And number two, if there’s ever a time a company need our leadership it’s right now.

Mrs. Haslam even chimed in on this week’s events at Pilot Flying J.

We like the fact that the owner of the local football team is confident and willing to fight for what he believes. That bodes well for the future prospects of the Browns.

We just wish that owner wasn’t currently facing a federal investigation into his company’s business practices.

But that’s just us.

Somewhat lost in all the Pilot Flying J fun was that Browns CEO Joe Banner and general manager Mike Lombardi met with the media to talk about next week’s NFL Draft.

And as we’ve suspected for a while now, the Browns could be looking to move around in the draft to help their efforts to restock the roster.

“It’s normal this time to be talking to teams,” Banner said. “Some are teams you exchange some opinions on and some are teams you get a feel for, ‘Are you open to moving up or down?’ As you get closer to the draft sometimes those conversations become more specific. We haven’t had any specific conversations about trades or what would be involved in a trade.

“We have to make the right decision based on the value. If we think trading back or up produces better value for something we think is important or we rated high enough, we have to do it. If you made the priority filling in a hole that existed, you might not get the fair market value you’re looking for in a trade. If we got offered something we thought made us a better team than staying where we are and picking or moving up, we’d make the trade. If we didn’t think it provided that benefit, we wouldn’t.”

Only five more days until the Browns are officially on the clock.

The Browns open at home, naturally, against Miami, giving them their first look at quarterback Ryan Tannehill – the only first-round quarterback from the 2012 NFL Draft that the Browns did not face last season. Oh yeah, the Browns are 1-13 on opening weekend since 1999.

Week 2 brings a trip to Baltimore for the Ravens’ home opener, a game where they will be celebrating their Super Bowl victory. Yeah, that will be fun.

The Browns get their NFL-mandated national television game in Week 5 when they host Buffalo. It will be Cleveland’s first home game on national TV since 2009 against Pittsburgh.

Cleveland gets a three-game homestand from Weeks 4 through 6 as they face Cincinnati, Buffalo and Detroit. But they pay for that in December when they play three of their final four games on the road, including a season-ending matchup with Pittsburgh for the fourth consecutive year.

We don’t need to tell you how the Browns did in the previous three years, do we?

“Our coaches and players are eagerly anticipating that opening kickoff against Miami as we continue to build our team this offseason,” Browns coach Rob Chudzinski said on the team’s website. “Having four of our first six games at FirstEnergy Stadium will allow our fans to create a distinct home-field advantage for our team, and I expect the Dawg Pound to be barking early and often. Finishing the season with four divisional games over the final eight weeks, with three of our last four games on the road, will give us an exciting challenge that I know we will be ready to face.”