Where does Liverpool go from here? 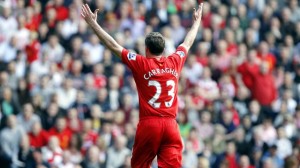 Liverpool ended the Premier League season on Sunday with a 1-0 win over relegated Queens Park Rangers.

The Reds close out Brendan Rodgers’ first season in charge in seventh place in the league table with 61 points. That represents a nine-point improvement over last year’s finish and the club’s highest point total in three years.

With the season now in the books, the fourth consecutive year without a spot in the Champions League, the question becomes what will the squad look like when they return in August for the new campaign.

Jamie Carragher will be in the broadcast booth as Sunday was his final game after 737 appearances with the club over the past 16 years. Steven Gerrard will be another year older (and recently had shoulder surgery), Pepe Reina may be in goal for Barcelona and Luis Suárez … we’ll get to him in a minute.

When the season started, Rodgers was talking about the need to be patient, as it takes time for a team to learn to play his brand of football and the club still needed to get rid of some dead weight.

The team did seem to play better as the season went along. After earning just 28 points in the season’s first 20 games, including just two in the first five games, the Reds tallied 33 points out of their final 18 games.

But against the six teams ahead of them in the table – Manchester United, Manchester City, Arsenal, Chelsea, Tottenham Hotspur and Everton – Liverpool could only manage one win in the 12 matches.

They’re not going to be moving up the table any time soon with results like that. As it stands, Liverpool is comfortably in the middle, they finish the season 12 points clear of West Bromwich Albion, but being in the middle doesn’t really do anything for a club.

On his way out the door Carragher talked about how the team is still a few years away from ending a league title drought that has now extended to 23 years (something Cleveland fans can sympathize with).

“If you’re talking about being champions in the next two years, I would say no, because the target at the moment is to get back in the top four,” he told The Daily Mail. “The disappointing thing about the last few years is where we have finished in the league. First and foremost, we have to try and get back in the top four rather than starting the season talking about titles and trophies.”

To get back into the top four, the team is going to have to spend some money to continue rebuilding the roster. The primary targets need to be goal scorers, because after Suárez’ 23 goals, only one other player scored in double digits – and that was Daniel Sturridge with just 10 goals.

Rodgers is reportedly going to have £20 million to spend over the summer, but he may be wise not to sign anything until he sees if the check from Fenway Sports Group actually clears.

“I think there will be a natural transition in the summer because we need to improve our depth because the squad was very shallow,” Rodgers told ESPN. “You want to do your business as early as you can and we will look to reinforce but come the beginning of the season we would hope to have a squad ready to challenge.”

Which brings us to Suárez.

There’s no doubt that the 26-year-old is talented – see his 23 goals in 33 games – but his act grew old long ago. And it only got worse when Suárez received a 10-game ban for biting Branislav Ivanovic during a game against Chelsea in April. The suspension runs through the first six games of the 2013-14 season.

By that time Suárez will hopefully be wearing a different uniform. We’re not one to harp on players having to behave a certain way on the teams we support (we rooted for Albert Belle after all) but the nonsense has finally caught up with Suárez and is outweighing any benefit he brings to the team on the field.

If Liverpool can find someone willing to pay for Suárez, he has been linked to Bayern Munich, then they should pull the trigger. Having him on the team is simply no longer worth the effort.

So that’s another season in the books. It was frustrating at times, but looking back the squad probably performed about as well as could be expected.

The season started with a call for patience and, while it ended with a win, there is still plenty of work to do.

“I have a long way to go to gain your trust fully,” Rodgers wrote in his program notes according to The Guardian. “We must work tirelessly to bridge the gap that has been created over time. We don’t like it, but I can promise you that the work taking place on and off the field will bear fruit. The progress this season may not have come as fast as many would’ve liked but I’d rather build the base first to ensure we have sustainable success in the future.”