Archive for the tag “Brendan Rodgers”

That is all it took to undo almost three months of work and put Liverpool on the outside of a top four Premier League finish and a coveted Champions League spot for next season.

Liverpool followed up a disappointing home loss to Manchester United on March 22 with an even more dispirited loss on Saturday against Arsenal at the Emirates. The pair of defeats leaves Liverpool seven points back of fourth-place Manchester City with just seven games remaining. (Although they caught on break today when City lost to Crystal Palace.)

“It’s frustrating that we got ourselves in a position over the last three months, very close, to then come up short in the past two games,” manager Brendan Rodgers told The Guardian. “But I look at Arsenal and their bench, the world class players on the field with big talent and it shows the continual work we have to do.”

There was a common thread that ran through both defeats, dating back to Dec. 14.

END_OF_DOCUMENT_TOKEN_TO_BE_REPLACED

Dude, how good is Philippe Coutinho?

We were left wondering that Sunday morning after Coutinho stuck it to Manchester City for the second consecutive, striking the winning goal in Liverpool’s 2-1 defeat of City. He also set up Jordan Henderson’s opening goal, one that was almost as pretty is Coutinho’s game winner. (And the fact that both goals came at the expense of defender Vincent Kompany should offer fans of the U.S. Men’s team a measure of satisfaction.)

In case you missed Coutinho’s goal in his last seven matches, we’ve got you covered.

“(Philippe) is a very selfless player and a very humble young guy who would rather create for others,” manager Brendan Rodgers told The Guardian. We are encouraging him to shoot more often. He has a wonderful body movement around the box, he doesn’t need many touches to shift it and shoot, as you saw with the phenomenal shot to beat Joe Hart at that angle. His technique is at a high level so he is going to score more goals. He is now arriving into the right areas more often. He is starting to get success and that encourages him to shoot more.”

END_OF_DOCUMENT_TOKEN_TO_BE_REPLACED

Liverpool solves one problem, but have they created another?

Exciting (and mildly surprising) news out of Anfield today as Liverpool has reportedly completed a £16 million transfer of talented (but controversial) striker Mario Balotelli.

The 24-year-old Balotelli will join the club from AC Milan and, if everything goes according to plan, could be on the bench for Monday’s showdown with Manchester City – the team that beat Liverpool for the Premier League title last season and Balotelli’s former club.

Despite saying just a few weeks ago that he had no interest in the Italian international, Liverpool manager Brendan Rodgers has obviously decided that Balotelli’s ability to find the back of the net – 34 goals in 50 games at AC Milan – is just what the club needs to fill in the gap on offense left by Luis Suárez.

END_OF_DOCUMENT_TOKEN_TO_BE_REPLACED

Three months after seeing their title chase slip away, Liverpool return to action on Sunday against Southampton for the start of the 2014-15 Premier League season.

While a new season always brings fresh hope for the 20 clubs in England’s top flight, Liverpool has legitimate reasons to believe the upcoming season will be a good one after finishing in second place last year, just two points off the pace of Manchester City.

As Liverpool kicks-off the nine-month marathon that is the Premier League season, let’s do a quick Thumbs up/Thumbs down about the club.

END_OF_DOCUMENT_TOKEN_TO_BE_REPLACED 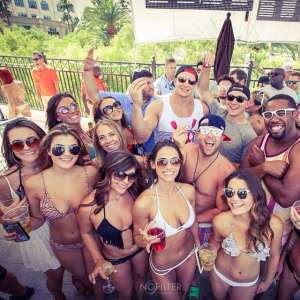 “There is something un-American about a young man not wanting to spend time with the ladies.” – Joe Namath

When the Cleveland Browns selected quarterback Johnny Manziel in the NFL Draft a few weeks ago the team knew what it was getting itself into with Manziel, who is a modern-day Joe Namath in terms of publicity.

Last week it was Peter King’s Monday Morning Quarterback report that Manziel “never had a playbook” while at Texas A&M. Of course, the Aggies had a weekly game plan with actual plays that Manziel was expected to learn and execute, which, as Eric Davis pointed out one morning on the NFL Network, is the same as having an actual playbook! (That is one of the reasons we enjoy the NFL Network over ESPN; instead of trying to be the loudest (and stupidest) person in the conversation, Davis, Steve Wyche, Terrell Davis and the rest of the rotating panel on NFL A.M. actually talk to one another in an effort to make sense.)

Then, over the weekend, came the news that Manziel spent his holiday in Las Vegas; hanging out with New England’s Rob Gronkowski, attending a UFC fight, joining in at a pool party and generally doing the kinds of things that people do when they visit Las Vegas.

Manziel also did one more thing over the weekend (at least according to him) – he studied his playbook as he prepares for the next round of OTAs with the Browns.

END_OF_DOCUMENT_TOKEN_TO_BE_REPLACED

A disappointing end to an otherwise great season

It’s taken us  most of a week to come to terms with the fact that Liverpool somehow managed to let the Premier League title slip through their fingers this season.

The club’s first championship since 1990 seem assured following the win over Manchester City in mid-April. But a slip from Steven Gerrard and an embarrassing 10 minutes at Crystal Palace derailed the championship dream, which officially died last Sunday when City easily handled West Ham.

Even though they fell three points shy of the title, it was still an exciting season, one that promises hope for next year as Liverpool makes its return to the Champions League.

END_OF_DOCUMENT_TOKEN_TO_BE_REPLACED 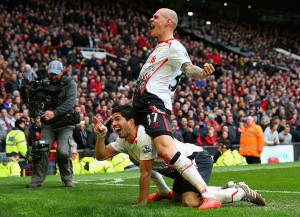 After five years of frustration, Liverpool walked out of Old Trafford on Sunday with their first road win against Manchester United since 2009.

The 3-0 beating pushes Liverpool 14 points clear of United in the Premier League table and, more importantly, leaves the Reds just four points back of league-leaders Chelsea (and holding a game in hand). With a spot in next year’s Champions League almost locked up with nine games to go in the season, the question now becomes: can Liverpool claim its first Premier League title in 24 years?

“We’ve showed today that we are genuine contenders and we are going to fight to the end for this,” he said in published reports. “We believe it, but I’ve said many times that in football the easiest thing to do is talk the talk. We’ve got to go and treat Cardiff like Manchester United and we’ve got to treat Sunderland like Manchester United. If we do we will win a lot of games until the end of the season. The rest of the teams around us have to believe we’re going for it.”

The win was Liverpool’s fifth consecutive in the league – they haven’t lost since their Dec. 29 match with Chelsea – and the club has taken 26 points out of its past 10 games.

And much of the credit goes to manager Brendan Rodgers.

END_OF_DOCUMENT_TOKEN_TO_BE_REPLACED

Following Liverpool’s 2-1 loss to Manchester City on Boxing Day, Reds manager Brendan Rodgers left no doubt as to how he felt about the officiating at the Etihad Stadium.

Rodgers let loose on the officials after they failed to call a possible penalty on a Luis Suárez take down and when they waved off a Raheem Sterling goal after ruling Sterling offsides – when it was clear that Sterling was in an on-side position.

“They had no help whatsoever from the officials. I never go on about officials but I thought today they were horrendous, in terms of performance.” he said. “We had nothing that went our way at all. I thought that the linesman on the offside one – they weren’t even on the same cut of grass, and if you’re working at this level, you have to get that right. It’s not even a difficult one, that. These are the things we work on and talk about, we are asking a young player to try and break their line. It was a perfect timed run and he’s given offside when he’s through one-on-one on goal.

“Listen, the officials make mistakes. I just felt that the mistakes made tonight shouldn’t have happened at this level.”

END_OF_DOCUMENT_TOKEN_TO_BE_REPLACED

Arsenal reportedly submitted a club-record bid of £40 million plus £1 for Liverpool striker Luis Suárez on Tuesday, but the Reds quickly rejected the bid.

Rather than being grateful that someone is willing to take Suárez off his hands for a fair price, Liverpool manager Brendan Rodgers got shirty over the request.

“Obviously (Arsenal’s first bid of £35 million) was an offer we didn’t deem worthy of the talent and even if they came back with that kind of amount (£55 million) there’s no guarantee he would be sold even for that because we are trying to build something here,” Rodgers told The Guardian.

Even if the club is bent out of shape over the offer, it still represents a 76 percent increase on the price that Liverpool originally paid for Suárez (£22.7 million). That’s not a bad return on investment.

END_OF_DOCUMENT_TOKEN_TO_BE_REPLACED

Where does Liverpool go from here?

Liverpool ended the Premier League season on Sunday with a 1-0 win over relegated Queens Park Rangers.

The Reds close out Brendan Rodgers’ first season in charge in seventh place in the league table with 61 points. That represents a nine-point improvement over last year’s finish and the club’s highest point total in three years.

With the season now in the books, the fourth consecutive year without a spot in the Champions League, the question becomes what will the squad look like when they return in August for the new campaign.