Three months after seeing their title chase slip away, Liverpool return to action on Sunday against Southampton for the start of the 2014-15 Premier League season.

While a new season always brings fresh hope for the 20 clubs in England’s top flight, Liverpool has legitimate reasons to believe the upcoming season will be a good one after finishing in second place last year, just two points off the pace of Manchester City.

As Liverpool kicks-off the nine-month marathon that is the Premier League season, let’s do a quick Thumbs up/Thumbs down about the club.

A summer of spending has transformed the team as Adam Lallana, Lazar Markovic, Emre Can, Alberto Moreno and Dejan Lovren bring youth and depth to the squad, while Rickie Lambert brings experience. Their contributions will be needed as Liverpool not only chase their 19th league title, but also make their return to Champions League football.

“That ability to attract top players is great,” manager Brendan Rodgers told The Liverpool Echo. “It’s a huge indication of the progress of the club – a really good symbol of where club is at. We have made huge strides in the last couple of years.

“If you’re a football player in Europe watching how we played last season and saw our supporters, your reaction would be that you’d want to play in that environment. It’s the most competitive league in the world and this is one of the biggest clubs in the world.

“It’s a team that plays exciting football. I’m happy with the players we have got in, and we’ll be set up for an exciting season.”

Thumbs down: History is not kind

While it’s hard to argue that the team has improved its depth, have they done enough to mount a title challenge? If history is any indication, the answer is, unfortunately, no.

Liverpool finished with 84 points last season, the second-highest for the team in the Premier League era, trailing only the 2008-09 squad that finished with 86 points – and also in second place. The next year, the club saw a 23-point drop and slipped five places in the table.

Since 1980, the club has totaled 80 or more points eight times, winning five titles, and every time they posted a lower point total the following season.

Thumbs up: The offense

Liverpool scored 101 goals last season, the second-most in the league. Of course 31 of those goals came from Luis Suárez, who is now in Barcelona serving a four-month ban for biting Italy’s Giorgio Chiellini  during a World Cup match.

Rodgers seems to be taking the approach that a collection of players – rather than one person – can work together to make up for the loss. (That belief hasn’t stopped Rodgers from continuing to search for someone to help out, though, as he has gone so far as to look at 33-year-old Samuel Eto’o.)

“I see players (on the squad) who scored 70 goals last season,” Rodgers has said in published reports. “When we didn’t have Luis (last year) we scored goals. That won’t be an issue.”

Daniel Sturridge (21 goals), Raheem Sterling and Philippe Coutinho all had their best seasons last year under Rodgers. If they can take their game to another level, and if Rodgers can work the same magic on Markovic, the club may be able to score enough goals to get by.

Sterling, in particular, could be on the verge of having a breakout season.

“The identity he has is to score goals and create goals. That’s what the job is,” Rodgers told The Guardian. “He scored 10 goals last year and this kid is only going to get better. When you’re so young, it’s important to understand exactly what your role is. Not just look good, you have to be efficient and effective. His development has gone to a new level. He’s way above the level from when he first came in.

“Tactically, technically, and what has been beautiful to watch with Raheem has been his maturity. He’s turning into a beautiful young man, with all the responsibility. He’s taking it all in his stride and now he’s in a good place with every part of his game. It’s just about maintaining that commitment to his work. He’s still only 19, but in big games he’s performed and he’s a wonderful talent.”

The biggest assist the offense could receive this year is for the defense to not be so porous. Which brings us to our next point.

Thumbs down: The defense

Liverpool gave up 50 goals last season (compared to Manchester City’s 37), the club’s worst effort in 15 years. A late-season draw with Crystal Palace, where Liverpool blew a three-goal lead, was clearly the low point of the campaign.

Rodgers has rebuilt the back line by bringing in Lovren, Javier Manquillo and Moreno, who should join Martin Skrtel as starters in front of goalkeeper Simon Mignolet.

The squad will be leaning heavily on Lovren to keep things under control, according to Rodgers.

“We need to be better (on defense),” Rodgers told The Liverpool Echo. “The attacking side has nothing to do with the team conceding stupid goals. We conceded a lot of poor goals due to bad individual mistakes last season. That is something that Dejan’s leadership can certainly help us with.”

It’s great that the club invested heavily on the defensive side of the ball, but until the newcomers show that they can make a difference this is going to be a question mark. 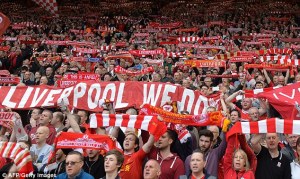 It was last year, though, that Rodgers and the club turned Anfield back into a house of horrors for opposing clubs. Liverpool won 16 games at home, bringing in 49 points – second most in the league.

A repeat of that performance will help the club’s chances immensely this year.

Thumbs up: The return of Champions League football

This is a tough one. Liverpool would not have been able to reshape its roster the way it did if it wasn’t offering the chance to play Champions League games this season. But the fact that they are facing a tougher road this season brings its own issues.

Rodgers had the luxury of focusing almost solely on league games last season – Liverpool only played a total of 43 competitive matches – allowing the players to rest; now he will have to deal with mid-week games against tougher competition while also working to keep fresh legs for the league games.

He’s already made the decision to limit Steven Gerrard’s playing time this season, saving the captain for the most-important matches. How Rodgers juggles his lineups as the club works its way through multiple competitions will be a key story line to watch this season.

Two years ago Rodgers took over a club that was in disarray, preaching patience while he went about the task of bringing Liverpool back to its rightful place among the Premier League’s elite.

The process accelerated beyond probably even Rodgers’ expectations as the Reds almost captured the title last season. Virtually every move he made worked and Rodgers may be the club’s biggest asset.

Rodgers has a vision, often remarking that, “At Liverpool there’s a strategy behind what we are doing,” and the players have clearly bought into what he is selling. And after last season so are we. There is something about him that gives fills us with a sense of calm when we see him on the touch line.

“The aim is to ensure this club is sustainable and that means on and off the field,” he told The Guardian. “This year we are better equipped because of the depth of the squad. I see it in the training. Young players give energy to senior players and give that enthusiasm. I can see from training that they have given some of the older players that nudge as well.”

Will Liverpool win the league this year? Probably not, as it is going to take time to work all the new players into the system that Rodgers wants them to play. Can they secure a top-four finish? Most certainly.

Basically, it comes down to “In Brendan We Trust.”

The season kicks off this weekend and we can’t way to see what surprises await.