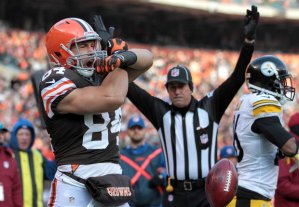 With the majority of the focus on the quarterback position during training camp, it is easy to forget that there are other stories and issues that the Cleveland Browns are working their way through.

One of those is a potential contract extension for fourth-year tight end Jordan Cameron, who is entering the final year of his rookie contract. Cameron had a breakout year last season, catching 80 passes and seven touchdowns, after totaling just 26 receptions and a lone touchdown in his first two seasons with the team.

With the availability of wide receiver Josh Gordon – the team’s top offensive threat – still in doubt for the season, Cameron should become the focus of the passing game and based on his production from last season should be in line for a big year. While he would most likely not command a contract in the neighborhood of what Jimmy Graham received from New Orleans (four years with $20 million in guaranteed money), if Cameron can up his stats from last year, his price tag would go up as compared to what it is now. So it makes sense for the Browns to start talking extension now.

We’re willing to chalk up the drop in production to the fact that Cameron was catching passes from Brandon Weeden and Jason Campbell (who threw two pick sixes the other night against Kansas City, in case you didn’t notice). Although that doesn’t really explain Gordon putting up huge numbers with the same quarterbacks, but maybe it is best not to think about that right now.

The Browns need playmakers on offense and Cameron appears to fit that description. Hopefully the Browns can work out a deal and, with better quarterback play, Cameron can show he’s worth it.

As the quarterback carousel turns

The Browns made a move at the quarterback position earlier today, releasing Tyler Thigpen and signing Rex Grossman.

Grossman hasn’t started an NFL game since 2011 and hasn’t anyone’s idea of a top quarterback since 2008 when he was still with the Bears – the Dolphins even chose Brady Quinn over him on Monday, for goodness sakes.

But none of that matters because Grossman is clearly in town for one reason only: to be another coach in the film room to help Brian Hoyer and Johnny Manziel learn offensive coordinator Kyle Shanahan’s offense.

Grossman has worked in Shanahan’s system in both Houston and Washington, and he clearly likes what he sees.

“Everybody has very similar play concepts, but it’s the details of his offense (that) are unbelievable, just how everything goes together really well and makes sense,” Grossman told The Plain Dealer. “And, when he gets in a rhythm calling plays, it’s the best I’ve ever seen. That’s one of the biggest reasons I wanted to be here, just being around a coordinator that demands respect from all the players, but he gets along with everyone.

“He’s got such a command of what he wants to do and what the offense (is) that he’s been molding and creating now for a long time.”

And, no, Grossman’s arrival does not mean the Browns can afford to trade Hoyer if he doesn’t win the starting job, as we saw tossed about on Twitter. If Grossman sets foot on the field during a game this fall, it means the season has turned into a disaster.

So let’s stop with the nonsense, please.

Turns out that it is not just Cleveland that is interested in the Browns quarterback battle.

Saturday night’s preseason friendly against Detroit was the highest-rated preseason game in the NFL Network’s 11-year history. The game drew an average of almost 3 million viewers, easily outpacing the previous top game, the 2007 Hall of Fame game between New Orleans and Pittsburgh in 2007, by 36 percent.

Then word came out late this afternoon that the Browns sold enough single-game tickets in just 30 minutes this morning to ensure there will be no home blackouts again this season. (h/t @NateUlrichABJ)

Yeah, tell us again how this is a Tribe Town.

We’re getting excited about David Blatt and the Cavs

We know we’re probably tardy to the party on this one, but we were reading the feature story in Sports Illustrated on David Blatt while on the stair master after work today and, holy smokes, are we looking forward to seeing what he can do.

In case you haven’t seen it, the story is here.