A disappointing end to an otherwise great season 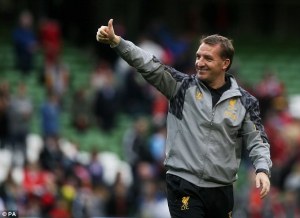 It’s taken us  most of a week to come to terms with the fact that Liverpool somehow managed to let the Premier League title slip through their fingers this season.

The club’s first championship since 1990 seem assured following the win over Manchester City in mid-April. But a slip from Steven Gerrard and an embarrassing 10 minutes at Crystal Palace derailed the championship dream, which officially died last Sunday when City easily handled West Ham.

Even though they fell three points shy of the title, it was still an exciting season, one that promises hope for next year as Liverpool makes its return to the Champions League.

Manager Brendan Rodgers held the club together while waiting out the suspension of Luis Suárez and, after a slow start, Liverpool woke up on Boxing Day at the top of the table. The Reds stumbled in consecutive losses to Manchester City and Chelsea to close out 2013, but once the calendar turned to January, Liverpool went on a historic run.

From Jan. 1 until the return fixture with Chelsea on April 27, Liverpool took 44 out of a possible 48 points to fight their way back to the top. They did it thanks to their offense, as the club finished the season with 101 league goals – one of just three teams to pull that off in the Premier League era.

They also made Anfield into a fortress, winning 16 times against just one draw and two defeats.

The offense was led by Suárez and Daniel Sturridge. Suárez was the league’s top scored with 31 goals, including 10 in December – the first Premier League player to hit double figures in a single month. Sturridge was second with 21 goals, including a stretch where he scored in eight consecutive league games.

Goal scoring wasn’t an issue, but keeping the other team off the scoreboard certainly was and ultimately is what caused Liverpool to lose the title.

The Reds conceded 50 goals – easily outpacing the totals given up by Manchester City (37) and Chelsea (27). If Liverpool had won the league they would have done it as easily the worst defensive team in at least the past decade, as last year’s Manchester United squad is the only title-winner to concede more than 40 goals in the last 10 seasons.

The one good part of that is it will help the team narrow its focus in the transfer market – they need players who can defend.

Rodgers, who has said he wants quality over quantity as he searches for “multi-dimensional” players, reportedly has his eye on a pair of Southampton players in midfielder Adam Lallana (a member of the English national team) and central defender Dejan Lovren (a position Rodgers has targeted as a priority), Bayern Munich winger Xherdan Shaqiri (a member of the Swiss national team), Chelsea’s Ryan Bertrand and Sevilla’s Alberto Moreno.

“You’ll get some players who are specialists and who need to play in particular positions, but if we can get players in who are multi-functional, and can play in different roles and are multi-dimensional in their work, it sets us up and gives me more options as a coach,” Rodgers said in published reports.

Rodgers could have a bankroll of between £40 million and £60 million to spend this summer, depending on how things shake out. And that amount could grow if someone comes calling for Suárez.

A year ago we were ready to move on from Suárez, having grown tired of his antics. But he kept it together this season and after being named Footballer of the Year in the Premier League, the thought of him leaving has us concerned.

Real Madrid reportedly (maybe) are willing to offer £70 million Suárez. Depending on who you believe, Barcelona could get in on the action as well, driving the price upward to £100 million.

If that turns out be true, it would be very difficult for Liverpool to say no. After all, £100 million could buy a lot of “multi-dimensional players.”

Liverpool will need those types of player next season as they deal with the reality of playing games in the Champions League. There is little doubt the club benefited from not being in the Champions League this season, allowing Rodgers to turn all the team’s focus to the next league game without having to worry about midweek games against top competition. And the goes a long way toward explaining why Liverpool made the fewest substitutions of any team this year; they didn’t need to worry about resting anyone.

But that is a topic for another day. We have the World Cup and the transfer season to get through this summer before the new season starts in August.

For now, we’re content to look back on a season that, while ultimately fell short of the goal of winning a title, was a memorable one. We may be late-comers to the sport – although we are going on eight years now as a supporter – but this season had so many twists and turns, and provided so many memorable moments, that there is no doubt we will be a fan for a long time to come.