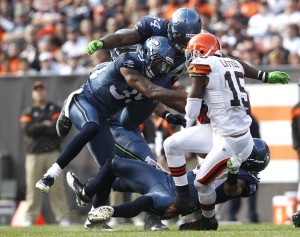 The Cleveland Browns continued to rebuild and reshape their wide receiver corps this week as they wait for official word on the future of Josh Gordon.

The Browns released fourth-year wide receiver Greg Little on Friday in a bit of a surprise move, if only because the position chart is a bit questionable right now. Little had a disappointing three seasons in Cleveland after being drafted in the second round of the 2011 NFL Draft out or North Carolina. While he came across as a player who always gave a good effort on game day, Little just wasn’t very productive.

He finishes his Cleveland career with 155 receptions (and seemingly almost as many drops), 1,821 yards and eight touchdowns. Both his receptions and yards decreased each year he was with the Browns, and his 14 dropped passes as a rookie with the second-highest in the league. He also ran the second-most pass routes in 2013, but somehow 102 players managed to gain more receiving yards than him.

The Browns have been working to find receiving help wherever they can, signing free agents Miles Austin (formerly of Dallas) and Earl Bennett (formerly of Chicago) this week.

Austin is the more intriguing of the two as he had Pro Bowl seasons in 2009 (81 receptions for 1,320 yards and 11 touchdowns) and 2010 (69-1,041-7) with the Cowboys, but has lingering hamstring issues (not a good sign for someone who relies on their legs) and only caught 24 passes last season in Dallas. Still, in the four seasons prior to that he averaged 65 receptions, 970 yards and eight touchdowns, so if he can get back to health he may be a viable option in the passing game.

Ultimately, though, we have to wonder how realistic it is to expect Austin or Bennett to contribute much to the offense. After all, they are free agents for a reason. And while we’ve seen some talk about Charles Johnson, the wide receiver the Browns picked up from Green Bay’s practice squad last season, being an option, fans need to be realistic. Johnson was a seventh-round draft pick who was on a practice squad; those types of players don’t often turn into viable NFL starters.

If things stay the way they are, and Gordon is suspended, then the Browns could be trotting out Austin and Nate Burleson as the starting wide receivers in Pittsburgh for Week 1.

But short of trading for Andre Johnson, there is probably not much that general manager Ray Farmer can do right now.

Sadly, this is not an unfamiliar situation the Browns find themselves in. While the ongoing quest to find a quarterback has received the bulk of the attention for the past 15 years, the wide receiver position hasn’t been much better. For every Josh Gordon there has been a Syndri Steptoe. For every 2007 Braylon Edwards, there has been a 2009 Brian Robiskie.

As bad as the quarterbacks have been, they haven’t always had much help on the receiving end.

The fact that Farmer has relied on picking up players like Austin and Bennett, rather than making a move for a more productive receiver, still has us hoping that the Browns know something – or have been led to believe something – about the NFL’s possible action against Gordon. If they have reason to believe that Gordon may only miss four to six games, as opposed to the entire season, then that could explain why they have not been more aggressive in looking for a wide receiver.

Because even with Johnny Manziel at quarterback, what they have assembled so far is probably not going to get it done come Sundays this fall.

The down side of Manziel Mania

This weekend at rookie minicamp the Browns are finally going to get to see Manziel do something football-related for the team, but the fact that there are some people who won’t be there to see it in person has caused a bit of a stir.

The Browns, who are not required to open the minicamp to the media at all per NFL rules, are allowing the media that regularly cover the team attend (albeit with limits) while telling everyone else not to bother booking a flight to Berea.

The decision did not sit well with some, starting with the Pro Football Writers of America. The group’s president, D. Orlando Ledbetter of the Atlanta Journal-Constitution, lodged a complaint, although he offered an extremely dubious reason for why the media should be allowed to turn the weekend into a circus.

“(The Browns) have the loophole with the rookie minicamp,” Ledbetter argued, “but St. Louis credentialed 100 people for Michael Sam’s press conference.”

Well, good for the Rams. But just because they are desperate for attention doesn’t mean the Browns need to follow. The notion that the Browns should welcome the national media to town so they can write “positive stories” about the team is ridiculous. Especially when one of the biggest whiners about the decision is a reporter for The New York Post, one of the most reprehensible newspapers in the business.

It’s a smart move by the Browns as everything from this point forward should be about what’s best for the team, and if those interests don’t align with everyone else’s, well that’s too bad. This weekend is about inundating Manziel, Justin Gilbert, Christian Kirksey, Terrance West and Pierre Desir with as much information and work that they can fit in.

There will be plenty of opportunities for the national media to roll into town once training camp starts this summer.

For now it’s time to drown out the noise and get to work so the Browns can give the media something real to write about.