Archive for the tag “Brendan Rodgers”

Time for Liverpool to start thinking about next season

A week ago, Liverpool pulled of its fourth consecutive win, an exciting victory against Tottenham Hotspur, to give fans hope that, somehow, someway, the Reds would find a way to grab a surprise fourth-place spot in the Premier League table.

On Saturday, Southampton – a team that is battling to stay out of the relegation zone – pretty much shut the door on that hope, posting a 3-1 win before a record Premier League crowd at St Mary’s of 32,070.

The loss drops the Reds seven points behind fourth-place Chelsea, which has two games in hand. Even if Liverpool were to win out, the most points they can finish with are 69, meaning Chelsea just has to win six of its final 10 games to keep Liverpool out of a Champions League spot.

END_OF_DOCUMENT_TOKEN_TO_BE_REPLACED

Liverpool finally gets it done; now it gets interesting

Liverpool finally earned a win over a top-four team under Brendan Rodgers, beating Tottenham Hotspur on Sunday at Anfield.

And in the process, the Reds made sure the final nine games of the season are going to be interesting.

Steven Gerrard’s goal on a penalty kick at the 81-minute mark helped Liverpool rally back for their third league win in a row and move within two points of Arsenal for fifth and within seven points of fourth-place Chelsea (although both the Gunners and the Blues have a game in hand).

END_OF_DOCUMENT_TOKEN_TO_BE_REPLACED

Liverpool apologizes for trying to improve their team 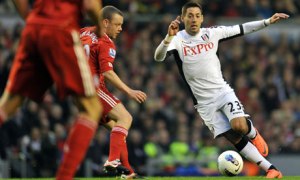 In one of those odd, British-only type stories, Liverpool officials have issued a formal apology for trying to improve the team over the summer by expressing interest in Clint Dempsey.

According to The Daily Mail, Liverpool co-owner Tom Werner visited Craven Cottage to apologize to Fulham chairman Mohadem Al Fayed for wanting to bring the American international to Anfield.

The visit was followed by a letter from Liverpool managing director Ian Ayre that said the club’s actions were “wrong” and should “never have occurred.”

END_OF_DOCUMENT_TOKEN_TO_BE_REPLACED

Is everyone ready for a national championship game between Notre Dame and an SEC team to be named later? Because barring some major upsets that’s what we are all going to be watching on Jan. 7.

And for the second year in a row the title game match up will underscore how badly college football needs a real playoff system.

END_OF_DOCUMENT_TOKEN_TO_BE_REPLACED

Defending champions Manchester City have turned their focus to Liverpool’s Luis Suárez, reportedly planning to offer anywhere from £40 million to £50 million during the January transfer window.

If that is the case, Liverpool really needs to make that deal – even if manager Brendan Rodgers is against it.

“It’s something I will always fight to protect the club and its assets,” Rodgers told The Daily Mail. “The modern game is very much about player movement – that’s part of football these days. But I will always fight to keep our best assets here. This is an incredible club to be involved with. Hopefully over the coming years we can return to that level, where players were here to win things and want to come here.

END_OF_DOCUMENT_TOKEN_TO_BE_REPLACED 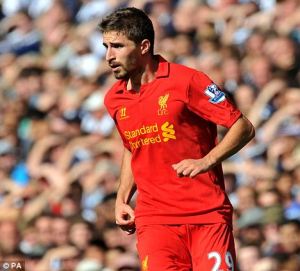 Liverpool striker Fabio Borini is going to be out of action for an undetermined amount of time after fracturing the scaphoid bone in his right foot.

Borini, who the club signed for £10million from AS Roma in July, either broke his foot during training with Italy’s Under-21 team or suffered the injury a few weeks ago and only discovered it on Thursday.

END_OF_DOCUMENT_TOKEN_TO_BE_REPLACED

Liverpool manager Brendan Rodgers came to the defense of striker Luis Suárez on Monday, saying that Suárez is receiving a raw deal from the officials.

“I find it incredible that in nearly all the coverage about Luis Suárez this weekend, very little focus has been placed on the fact that he was the victim of a stamping incident within the first five minutes of the game,” Rodgers told The Daily Mail. “There seems to be one set of rules for Luis and another set for everyone else. No one should be distracted from the real issue here, both at Anfield and at another game played on Sunday, when Luis and another player were hurt in off-the-ball incidents that went unpunished but were caught on TV cameras.

END_OF_DOCUMENT_TOKEN_TO_BE_REPLACED

Suárez hat trick finally gets Liverpool on the board

If you had asked us before the season started which team would be the first to win a game – Liverpool or the Cleveland Browns – we easily would have put our money on the Reds.

We just never would have believed it would take until Week 4 of the NFL season for Liverpool to finally put a notch in the win column.

Luis Suárez had a hat trick, and Nuri Sahin and Steven Gerrard each added a goal, as Liverpool beat Norwich City, 5-2, to give Brendan Rodgers his first win as manager.

END_OF_DOCUMENT_TOKEN_TO_BE_REPLACED

We haven’t been a Premier League fan as long as most, but we’ve been following the league long enough to not be surprised.

END_OF_DOCUMENT_TOKEN_TO_BE_REPLACED 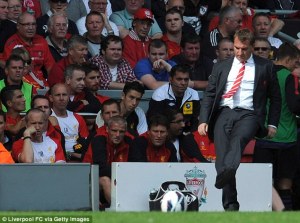 This all sounds vaguely familiar.

For fans of Cleveland’s pro sports team, who know from angst, some of the elements will have a familiar ring to them. In fact, they could have easily come from the Indians, Browns or Cavs themselves.