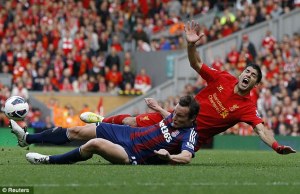 Liverpool manager Brendan Rodgers came to the defense of striker Luis Suárez on Monday, saying that Suárez is receiving a raw deal from the officials.

“I find it incredible that in nearly all the coverage about Luis Suárez this weekend, very little focus has been placed on the fact that he was the victim of a stamping incident within the first five minutes of the game,” Rodgers told The Daily Mail. “There seems to be one set of rules for Luis and another set for everyone else. No one should be distracted from the real issue here, both at Anfield and at another game played on Sunday, when Luis and another player were hurt in off-the-ball incidents that went unpunished but were caught on TV cameras.

“I believe some people need to develop a sense of perspective and I also believe the vilification of Luis is both wrong and unfair.”

We love that Rodgers is standing up for his players, but the club is just reaping what Suárez has sown. When you fall down any time a defender even looks at you, you’re not going to get the benefit of the doubt. (Even Anderson Varajeo thinks Suárez dives too much.) And that is exactly what Suárez does and there have been several times already this season where a defender took Suárez down and could have received a booking, but the ref decided otherwise.

“There is no doubt Suárez goes down very, very easily,’ said Alan Hansen, a current BBC reporter and former Liverpool captain. “His reputation precedes him. It’s very difficult for him to get a penalty. When there is minimal contact he has got to try and stay on his feet.”

“You have got Suárez falling over in the box second half which was really, really disappointing,” Pulis said. “I think that should be highlighted, as I have said before. I am concerned about the simulation and putting pressure on the ref. It’s a tough enough job as it is. For professional footballers to be doing that is just not right. Give him three games and he will stop falling over.”

So, thumbs up to Rodgers for having his player’s back, but the person he should be talking to is sitting in the Anfield locker room. Because if Rodgers can’t get Suárez to stop with the shenanigans, the next call may be coming from the Football Association.

And that is one call the neither Rodgers or Suárez are going to be happy to accept.