Suárez hat trick finally gets Liverpool on the board 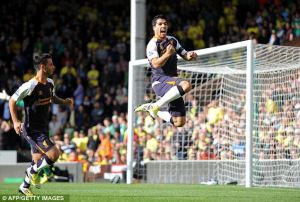 If you had asked us before the season started which team would be the first to win a game – Liverpool or the Cleveland Browns – we easily would have put our money on the Reds.

We just never would have believed it would take until Week 4 of the NFL season for Liverpool to finally put a notch in the win column.

Luis Suárez had a hat trick, and Nuri Sahin and Steven Gerrard each added a goal, as Liverpool beat Norwich City, 5-2, to give Brendan Rodgers his first win as manager.

“It was fantastic,” Rodgers told The Daily Mail. ” “‘We scored five goals, could have had a few more, and our control and domination of the game were very impressive. Right to the end, our work-rate and our intensity were good. It’s been a good day.”

Liverpool had gone five league games without a win to open the season, the squad’s worst start in more than a century (and people think the Indians had troubles this year).

This was the second hat trick that Suárez has posted against Norwich City in the past five months and he has six goals in his last six games.

“His goals here were incredible last year and this was another masterclass in finishing apart from the one on one chance,” Rodgers said. “His first goal was terrific. The second one typifies him because he missed his easiest chance he had, but he didn’t get disappointed, won back the ball, nutmegged the defender with an incredible piece of skill and then to finish the way he did was brilliant.

“It was a special day for him and the team.”

Rodgers changed the starting lineup, turning to youngsters Suso, Raheem Sterling and Andre Wisdom, who had just 16 first-team appearances between them, on the same day he told Stewart Downing and Jose Enrique that they need to step up their game if they want to stay on the pitch.

“What is important is that you have good communication,” Rodgers said. “I don’t waste time waiting until January to tell both players what I know now. So they know in relation to the demands of what we want and certainly what it is going to take for us to succeed and for them to fit into the group.

“As coaches we are not magicians. For me football players are not different to plumbers, to joiners to bricklayers, they are self-employed and us as medics, coaches and managers we are the tools that help them to be better.”

It’s great that Liverpool finally put up a win, but they can’t play Norwich City every week. The team looks to be slowly moving in the right direction under Rodgers, but there is still a lot of work to do.

But, as Rodgers said, Saturday was a good day.