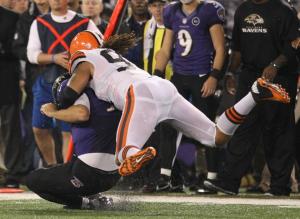 And while the Browns gave a better effort than they did just four days prior, they still ended the night on the wrong end of the scoreboard, falling to 0-4 on the season after a 23-16 loss to the Ravens.

We know there are no moral victories and all that, but the fact that the Browns had a chance to tie the game at the end is a positive. The Ravens are a Super Bowl contender that has won 12 consecutive home games and 20-of-21 overall at home. After spending all week hearing about how the Browns were going to be embarrassed on national TV, it was good to see the Browns hang with the Ravens as best they could.