Liverpool solves one problem, but have they created another? 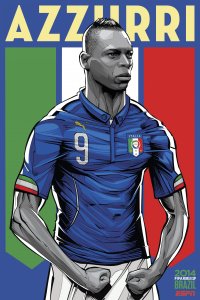 Exciting (and mildly surprising) news out of Anfield today as Liverpool has reportedly completed a £16 million transfer of talented (but controversial) striker Mario Balotelli.

The 24-year-old Balotelli will join the club from AC Milan and, if everything goes according to plan, could be on the bench for Monday’s showdown with Manchester City – the team that beat Liverpool for the Premier League title last season and Balotelli’s former club.

Despite saying just a few weeks ago that he had no interest in the Italian international, Liverpool manager Brendan Rodgers has obviously decided that Balotelli’s ability to find the back of the net – 34 goals in 50 games at AC Milan – is just what the club needs to fill in the gap on offense left by Luis Suárez.

Just as importantly, Balotelli brings both Champions League experience and title-winning experience (he had the assist on Sergio Agüero’s league-winning goal for Manchester City on the last day of the 2011-12 season) to a club that is returning to Champions League play while also looking for its first league title in 19 years.

While Balotelli solves a problem on offense, he could potentially create a new problem for the club.

Balotelli doesn’t come without his baggage, of course. He repeatedly clashed with manager Roberto Mancini while with Manchester City, and had a number of off-the-field incidents. He also didn’t play very well this summer at the World Cup. (Although there is plenty of blame to go around as the Italians lost twice in the group stage.)

At Liverpool he won’t have to be the focal point of the offense as long as Daniel Sturridge, Raheem Sterling, Philippe Coutinho and Adam Lallana (once he returns to health) are on the squad. That does raise the question, however, of whether or not Balotelli can be happy being part of an ensemble, rather than the lead man.

But that is where are faith in Rodgers comes into play.

Rodgers got the best out of Suárez last season by backing his players to the limit. Iif anyone can get Balotelli to buy into the program it is Rodgers.

“You can’t argue with the fact (Mario) is a world-class player and Rodgers has unlocked potential before – Daniel Sturridge had moved around a lot before signing for the club,” former Liverpool player Stephen Warnock told BBC Sport. “If he gets the best out of him, Balotelli is wonderful business, but the first thing Brendan Rodgers will say is that Balotelli is not a direct replacement for Suárez (but rather) is his own man.

“You’ve got to hope the player matures. Balotelli’s at a stage now where he must be thinking ‘I’m only going to get so many more chances.’ He will know this is a massive opportunity to resurrect himself in England.”

Even if Rodgers can only keep Balotelli on the right path for a year or two, the payoff may be worth it.

And if he doesn’t? Well, it will still be something to see, just not in a good way.

Because when it comes to Super Mario, there is never a dull moment.