Is Owen Marecic a star in waiting for the Browns? 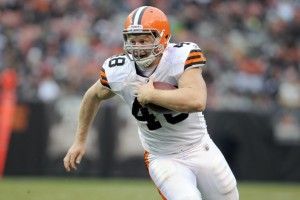 Cleveland Browns fans can certainly be excused for cringing over the past two years whenever they have seen fullback Owen Marecic in the offensive huddle.

And he lost his starting spot last season to Alex Smith – a tight end.

According to some media reports, the third-year player out of Stanford is “under the gun to prove his lead-blocking is indispensable.”

Following last week’s three-day minicamp, the last team activity before training camp, coach Rob Chudzinski admitted he’s not sure what is going to happen at the fullback position this fall.

“That’s one position where, until you get in pads, you are out here, practicing and guys are going up to each other like they are going to block each other and take on blocks and you stop. That’s a position until, you get in pads, it’s really difficult to evaluate,” he said. “As I’ve mentioned before, I’ve been fortunate to have been around all different types of fullbacks. Whether it was the guy that’s a blocker and that’s all he does, to a guy who has been a runner and more of a tailback type of guy, to the other guys who are more of a receiver-type guy.”

And there are fans who still pine away for bruising fullback Lawrence Vickers – who has rushed nine times total over the past four seasons – who has bounced from Houston to Dallas after being replaced by Marecic after the 2010 season.

Candidly, Marecic’s days appear to be numbered in Orange and Brown.

But then we read this article, which talks about how San Francisco coach Jim Harbaugh was all set to draft his former player before the Browns plucked Marecic out of Harbaugh’s grasp and foiled his plans.

The 49ers have gained a reputation over the past few months as being a model NFL franchise, one worthy of praise and emulation. They are so forward-thinking that they hired a former NFL coach with a career record of 33-47, one who’s offenses were ranked 25th or lower four times in his five-years as a head coach, to work as an offensive consultant. That franchise believed that Marecic was their type of player, a “hard worker who would do whatever and embrace contact.”

If a coach like Jim Harbaugh was willing to draft Marecic well, then, who are we to argue?

We’re going to chalk up Marecic’s poor performance over the past two seasons to being misused, along with several other players, in former coach Pat Shurmur’s offense.

So get ready Cleveland, the Marecic train is getting ready to roll in 2013.

One thought on “Is Owen Marecic a star in waiting for the Browns?”