The legacy of Owen Marecic 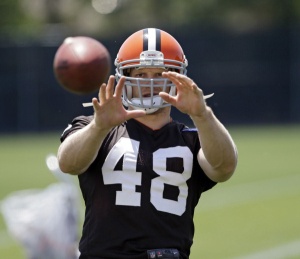 The Cleveland Browns continued to make moves on Tuesday as they released several players to get down to the NFL-mandated roster limit of 75 players.

In a bit of a surprising move, the club released third-year fullback Owen Marecic, one of the players the Browns drafted with a pick obtained in the Julio Jones draft day trade with Atlanta.

Marecic had his ups and downs with the Browns, but what fan can forget that career-high three-yard run against Miami in Week 3 of his rookie season? Or how he matched that with another three-yard burst against St. Louis in Week 9?

Who among us could have imagined that run would be the last time Marecic would gain a rushing yard while wearing the Orange and Brown?

Or how about the fact that the Browns were undefeated when Marecic caught at least two passes in a game? It’s true! He had two receptions for 13 yards in the Week 2 win against Indianapolis in 2011, and matched that with two catches for 13 yards in a Week 10 win against Jacksonville.

Sadly, Browns fans are left only with the memories, as Marecic is now free to take his talents elsewhere. Perhaps he will land in San Francisco; after all 49ers coach Jim Harbaugh was all set to draft Marecic before the Browns beat him to the punch.  His plans foiled once, surely a coach like Harbaugh will be doing all he can to bring a talented player like Marecic into the fold.

Marecic was not the only player exiting the Browns backfield on Tuesday, as the team (in an actual surprise) placed running back Montario Hardesty on season-ending injured reserve. Hardesty joins fellow running back Dion Lewis on the IR list, leaving Brandon Jackson and Chris Ogbonnaya as the backups to Trent Richardson.

Hardesty had arthroscopic surgery on his knee recently and was expected to miss the first few games of the season. Before hurting his knee Hardesty had injured his thumb while taking a direct snap in practice, has hurt the ACL in both of his knees, torn a calf muscle and suffered a pulled hamstring.

He’s not exactly been a player the team can rely on – this will be the second full season Hardesty has missed since being drafted in 2010 – so it will be interesting to see if he has a place with the team in the future, especially as his rookie contract expires at the end of this season.

If we have seen the last of Hardesty in a Cleveland uniform, he will exit town having played 22 games in three years for 537 yards, adding another 138 receiving yards and scoring a lone touchdown.

At this point, we’re just ready for the team to get through Thursday night’s friendly with the Bears and move on to the regular season.

2 thoughts on “The legacy of Owen Marecic”