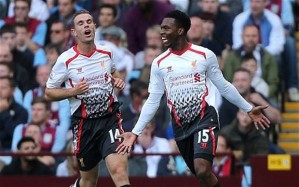 Two games into the season, Liverpool finds itself tied for second place near the top of the Premier League table with Tottenham Hotspur. It’s the first time the Red have won their first two games of the season since 2008-09, a campaign that saw them finish in second place with 86 points.

More importantly, the club is now 5-0-1 during the first six games they have played without Luis Suárez, who has four more matches left on his suspension for biting Branislav Ivanovic. It would be a bit daft to try and use Liverpool’s short-term run of success to build an argument that they are better off without the talented but mercurial Suárez.

But Liverpool is winning and, in the process, is learning a valuable lesson – how to win without Suárez. And no one is taking that lesson to heart more than Daniel Sturridge.

We look at what that means for the club’s success this year in our latest at World Soccer Talk.