For a few weeks now we’ve been wondering if the Cleveland Indians have one last run in them to stay in the playoff race or if it’s time to call the season.

The last week may have provided us with the answer.

A three-game sweep in Atlanta … a weekend to forget in Detroit that was saved only by an improbably Mike Aviles grand slam … a series-opening loss to Baltimore where Justin Masterson left in the second inning with an injury … and, well, we’re ready to call it a season.

Sure, it is conceivable that the Tribe can stay in the playoff race (just like it is conceivable that the Cleveland Browns could win the AFC North Division this fall), with the hope resting on the weak slate of opponents left on the schedule once Baltimore leaves town. After all, the Tribe is “only” four games out of a Wild Card spot (but that could change for the negative by the time the Orioles leave town).

As Jonah Keri points out at Grantland, the Tribe plays 15 of its last 26 games (counting Monday’s effort against the Orioles) at home and only nine of those final 26 games are against teams that currently have a winning record. And, while the Indians are an embarrassing 4-15 against Detroit, they are 68-50 against every other team (following Monday’s loss).

But it is hard to see how the Tribe can stay afloat in the playoff race when you take into account just how bad their offense has been for the better part of a month.

Consider the following two Tribe offenses from the month of August:

The first example are the numbers the Tribe put up in August 2012, a month when they went 5-24 and completely fell apart with an offense featuring the likes of Jack Hannahan, Casey Kotchman and Shelley Duncan, among others.

The second example provides the numbers of this year’s “improved” Indians lineup, one that includes Nick Swisher and his .243 batting average; Michael Bourn, who is batting just .220 since the All-Star break; and Jason Giambi, who inexplicably is still receiving at bats despite hitting just .157 since the All-Star break (down from his .200 batting average before the break). Just for fun, let’s throw Asdrubal Cabrera and his .216 average in there as well.

Despite putting up numbers as bad as they did at this time last season, the Indians managed to go 12-16 in August in large part to their starting pitching.  Consider that since the All-Star break Masterson has posted an ERA of 2,89 while limiting opposing batters to a .216 batting average, Ubaldo Jimenez is at 2.53/.217, Danny Salazar is at 3.33/.220, Corey Kluber (before he got hurt) is at 2.33/.240 and even Scott Kazmir, despite some rough outings, has posted an ERA of 3.89 while allowing a batting average against of .256.

It seems unrealistic to expect the starters to keep that going for another month, though. Masterson is now hurt with a reported oblique injury; Salazar has already thrown 126 innings (between the majors and the minors) and appears to be on a strict pitch count; Kluber has been out since Aug. 5 with a finger injury and may come back Friday night in a planned relief effort of Kazmir, who may be nearing his serviceable innings for 2013; and Jimenez will always be Jimenez, no matter what the stats say.

So, you tell us Tribe fans: does that sound like a team that can make it through the final 25 games of the season in one piece?

With the season opener just six days away, the Cleveland Browns are still fine-tuning their 53-man roster.

The good news is that the top 36 players, also known as “the group that will play the majority of the time” were never really in doubt about making the team. The only real question now is how the coaching staff will move the various pieces around, especially on defense and extra especially in the secondary, where Buster Skrine is the starting corner back (for now) opposite Joe Haden. We have a feeling we are going to see a lot of Chris Owens on the field as well as there is little doubt teams will be looking to feast on Skrine.

The one player cut that surprised us a little bit was wide receiver David Nelson. The Browns knew he was coming off an ACL tear that cost him almost all of the 2012 season when they signed him; we thought the team would find a way to keep him around.

As to what kind of impact the players the Browns picked up … well it’s important to remember that those players are available for a reason. In other words, you may want to hold off on getting a jersey with one of their names on the back.

The one player that did catch our attention is running back Bobby Rainey, who was one of Baltimore’s final cuts and a player the Ravens hoped to keep on their practice squad. Rainey should help out in the return game – he had seven kickoff returns for 223 yards in the preseason – and at running back, where the Browns are thin behind Trent Richardson after waiving Brandon Jackson and placing both Dion Lewis and Montario Hardesty on season-ending injured reserve.

Of course, Rainey has had solid preseasons in consecutive years but the Ravens still cut him, so it’s probably a good idea to not over-sell his value just right now.

“I’m happy with what we’ve done and what we’ve been able to put together, with the direction that we’re going,” coach Rob Chudzinski told the team’s website. “We’re building for sustainable success. That’s our process of doing that. We’re excited about getting into the season now and getting a chance to go play some teams and do this thing, and I know the team feels that way as well.”

Could the Browns have done more to improve the club? Probably. One thing that is for certain, though, is that you simply can’t fix a team as dysfunctional as the Browns in one draft, one free agency period or one training camp.

So the question becomes, have they done enough to be competitive?

We’ll start getting some answers come Sunday at 1 p.m.

What else is there to say about Daniel Sturridge? 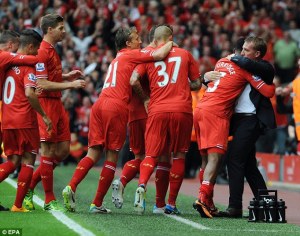 Another week, another win for Liverpool, your top-of-the-table squad in the Premier League, following Sunday’s 1-0 victory over Manchester United.

Daniel Sturridge – who else? – scored the game winner just four minutes into the game as he flicked home a Daniel Agger header. After that, the Liverpool defense and goal keeper Simon Mignolet kept Manchester United at bay, giving Liverpool its third consecutive win to open the season.

Mignolet has been every bit as impressive as Sturridge through the early part of the season. After struggling a bit in the first half of the opening game against Stoke City, Mignolet has settled down and has yet to allow in a goal in 270 minutes of Premier League action.

Liverpool is now 6-0-1 during the first six games they have played without the suspended Luis Suárez, a stat the bears repeating.

At the end of the game, Anfield was rocking with a noise level that we haven’t heard in a while.

And it was a sweet, sweet sound.