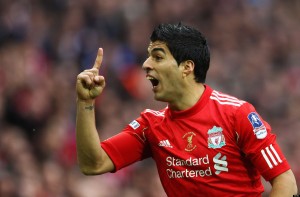 In an exclusive interview with The Guardian newspaper, Luis Suárez has asked to leave Liverpool, claiming that the club promised him he could go if they failed to qualify for a spot in the Champions League.

Suárez said he will take the issue to the Premier League to try and force a move before the league’s transfer window closes on Sept. 2.

Suárez does not have to go away mad, it’s enough at this point that he just go away.

We have the full report in our latest at World Soccer Talk.