We admit to knowing next to nothing about Blatt before the Cavs undertook their third head coaching search in the past four years. But the more we learn about him the more we are intrigued by the hiring.

Blatt comes to the Cavs fresh off leading Maccabi Tel Aviv to the Euroleague championship. His coaching job in the tournament led one NBA general manager to observe that “Maccabi was outgunned at every position except coach. David took down two Goliaths in a weekend. He belongs in the NBA.” (h/t to @WFNYJacob for the link to that story.)

Over the past four seasons, Blatt’s teams went 222-55 and, in addition to this year’s Euroleague title, won the Israeli Cup and Israeli league title. He’s been a head coach in Europe for 15 years and coached the Russian national team from 2006 to 2012. (So at least he will be used to the harsh winter weather in Northeast Ohio.)

That diverse background should also be an asset when it comes to dealing with NBA players.

“Blatt understands emotions of players, their different attitudes, and knows how to get it all into one,” former Cavs guard Jeremy Pargo, who played for a season under Blatt, told Eurobasket. “Those are ingredients one needs to be a successful coach in the NBA.”

“NBA coaches deal with lots of different things such as, players who are pretty much the coach themselves (Kyrie Irving?) or guys that don’t agree with the coach (Dion Waiters?), and you need to be able to work it all out and get wins in difficult situations – and I think Blatt is pretty good at that. If he gets the opportunity it’s a good opportunity for him.”

We have no idea whether or not Blatt will work out – no one does – or if Cavs owner Dan Gilbert will have the patience to find out.

But he’s not an NBA retread or a college coach, and for that we’re grateful.

Because of that, we’re ready to roll with the Cavs on this decision.

The Browns have rookies not named Johnny Manziel? 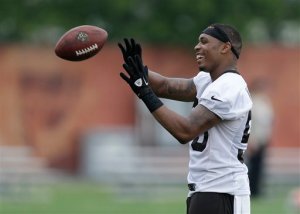 With all the attention focused on quarterback Johnny Manziel, it is sometimes easy to forget that the Cleveland Browns actually have five other draft picks on the roster.

That’s why it was nice to see some news about third-round draft choice Christian Kirksey. While Kirskey is an inside linebacker and should (hopefully) take over the starting job from Craig Robertson, Browns coach Mike Pettine is planning to to see what Kirksey can also do on the outside.

“You’re trying to get guys to master their original position,” Pettine told The Beacon Journal. “You don’t want them to become the old ‘jack of all trades, master of none.’ But when the roster gets trimmed down, then you realize you’ve got to sit another eight guys on game day [and] you have to have some guys doing multiple jobs.”

Taking a look at Kirksey on the outside makes sense, as his draft profile lists, among his strengths, that he is “agile and athletic” and is a player who “flows to the ball when he has a clear path” and has “experience in space and over the slot.” The Browns have had trouble covering tight ends for as long as we can remember, so having an athletic player like Kirksey on the field should help. (Of course, he also is reportedly “outmuscled at the point of attack” and “gets stuck on blocks and covered up.” Which gives us pause about the inside linebacker role.)

For his part, Kirskey sounds ready for the challenge.

Should be interesting to see how this plays out.

Much ado about nothing

What were the odds that Pettine – and not Manziel – would ignite one of the hottest (and ultimately most pointless) stories of the off season as he set off the hoople heads this week with what was clearly a joke in an article with Monday Morning Quarterback.

At least Greg Bedard, the author of the profile on Pettine, called people to task over the nonsense.

“I’m upset about it because I think this is an example of problems that plague our industry,” Bedard told New England Sports Tonight. “I wrote over three thousand words on Mike Pettine . . . this was just a funny anecdote in the story. It was Mike Pettine busting some chops. A story about Tom Brady busting the Jets’ chops. That’s all it was. It’s ridiculous, all of this.

“Any insinuation that Bill Belichick, that he gained some sort of edge, that they stole playbooks or anything like that. For anybody to take that out of my piece is flat out wrong.”

It’s all so very silly, but at least it didn’t involve Pettine floating on an inflatable swan with a bottle of champagne.

If Nick Swisher heats up, you can thank us later

Around this time last season, we raised the question of why, exactly, Jason Giambi was taking up a roster spot with the Cleveland Indians.

While Giambi would only hit .183 on the season, he wound up producing a couple of clutch hits to help the Tribe capture a Wild Card spot.

So it should come as no surprise, really, that a day after we wondered what the Indians should do with an under-performing Nick Swisher, that Swisher hits a game-winning grand slam against the Angels.

It was the second game-winning home run of the week for Swisher and, sure, he’s only hitting .120 with 10 strikesouts since coming off the disabled list, but two of his three hits have been home runs.

At least it’s a start. And we never promised immediate results.

We may need a Kickstarter campaign

According to this article at Taylor Blitz Times, former Oakland Raiders defensive back Mike Davis is considering putting a piece of NFL memorabilia up for sale – the football he intercepted in front of Ozzie Newsome in the Red Right 88 game at Municipal Stadium on Jan. 4, 1981.

If only we had a few extra dollars laying around, we’d have to think about getting in on the bidding so we could bury the ball and possibly help end the sports curse that has been hanging over Cleveland for the past 50 years.