Why is Jason Giambi on the Tribe’s roster exactly? 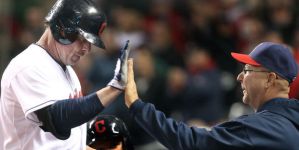 We knew the numbers were bad.

We just didn’t know they were that bad.

After Friday night’s 0-for-4 performance against Boston, Giambi is now batting .150 on the season. But wait, there’s more! During the month of May, Giambi has three hits total in 32 at bats.  (h/t to Rick at WFNY for pointing out that fun little nugget during the game on Twitter.)

Despite it being pretty clear that Giambi is done as a player, Tribe manager Terry Francona keeps putting his name on the lineup card for reasons that remain a puzzle to fans.

Giambi’s last viable season was 2008 and there is a reason why he was interviewing for a managerial job with Colorado in February and we are seeing it on a nightly basis with the Indians.

So why is he on the team again?

“He’s not a veteran, he’s the veteran,” Francona told The New York Times before the season started. “I’ve already gone to him three or four times asking him questions. He’s solid. Brings a lot.”

Giambi is considered a good teammate and brings a lot of baseball knowledge to the Tribe, which can be useful to the younger players on the roster.

“I’ll come back to the dugout and he’ll call me out right away, he’ll say, ‘Hey, you dipped your shoulder on this one,'” second baseman Jason Kipnis recently told The Plain Dealer. “He knows swings, he knows bat paths. He’s a real smart player and he has a lot of talent. I think he’s done a great job of passing that along to other guys on this team. … He’s been one of the most approachable guys I’ve ever come across. He’s such an easy-going guy, but the man knows the game of baseball.”

The Indians are currently a half-game behind Detroit in the Central Division and in the midst of a schedule stretch that has them playing Boston, Cincinnati, Tampa Bay, Detroit, Texas and Washington. They have also lost three of their past four games (which easily could be six-of-eight without some late luck against Seattle).

“He has a presence about him,” Francona told The Plain Dealer during spring training. “He doesn’t swing at bad pitches ever. He’ll take a walk. He still has his bat speed. I’ve been very impressed.”

The Tribe is going to have a hard enough time staying in the race without giving away four at-bats every night because Francona wants to do a friend a solid.

It’s time that Francona sees what everyone else sees – Giambi’s contributions should be confined to the dugout and the clubhouse – not the field.

3 thoughts on “Why is Jason Giambi on the Tribe’s roster exactly?”