Who do ya Love? For the Cavs, it should be Andrew Wiggins 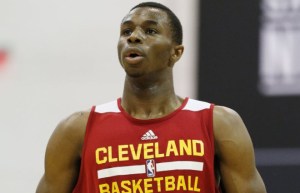 That’s the question that has been rattling around in our brain since the news broke that the Cavs were on the verge (any moment know) of trading with Minnesota for Love in a deal that would include Wiggins. (Unless of course they’re not; it’s been nothing if not a fluid situation.)

From the time the news first broke we’ve been firmly in the Keep Wiggins camp; he just got here and we would very much like to see what he can do with LeBron James and Kyrie Irving.

One of the downsides of LeBron leaving the Cavs in 2010, in addition to all the losing, is that we’ve fallen out of touch with the rest of the NBA. We know Love is good, but we keep forgetting just how good he is. Last season, he averaged 26.1 points, 12.5 rebounds and 4.4 assists per game, while shooting 37.6 percent shooting from the 3-point line. With those numbers, Love would have led the Cavs in scoring and rebounds, been second in assists, and tops in 3-point shooting among the players currently on the roster.

That’s why we found this article in The Sporting News so interesting as it hits on the most common criticisms of Love and shines a light on them.

Love carries the reputation of someone who is injury prone after missing almost a quarter of his NBA career due to injuries. But most of those missed games were because of breaks in his hands; take those out and he’s only missed 11 games in his career. More importantly, his injuries have not included his knees, feet or back – all death blows to a big man in the NBA.

There is also the argument that Love has never made the playoffs – but he plays for the Timberwolves, so what do you expect?

Finally, while his defense is weak, he is rated “Very Good” by Synergy Sports as in individual defender and, in post-up situations, he is ranked “Excellent” on Synergy’s scale. So there is something to work with; it would be up to head coach David Blatt to figure out how to work around Love’s shortcomings.

So what’s our hang up, you ask? Like we said, as much as we are intrigued with what Love could do with James and Irving, we are even more intrigued by what Wiggins can do. There’s a reason, after all, why Wiggins was the No.1 overall draft pick (and it was more than just the injury fears over Joel Embiid).

Heading into the draft, scouts talked about Wiggins’ “extraordinary athleticism,” a player who is “an explosive leaper with incredible conditioning,” and one who is “a gifted defender who has the makings of a top-line scorer at the next level.”

So wait, why should the Cavs trade him again? Seriously – why should they trade him? (After watching that video, we’re reminded that if the Cavs had drafted Nerlens Noel rather than Anthony Bennett, we probably would not be talking about Kevin Love.)

There’s also the nagging feeling that the whole “the Cavs must trade for Love now” talk is all just a bit too rushed. The Timberwolves have no leverage in this – Love has already made it clear he is not resigning after this season. It is understandable that Minnesota would want a trade to happen now, but what is the rush on the Cavs part? They have all the leverage here – having Love would be nice, but not having him doesn’t mean the team is automatically heading back to the lottery.

Part of the urgency from Minnesota also stems from the fact that once Wiggins signs a contract with the Cavs, which he reportedly will do any day now, he can’t be traded for 30 days. That means the Cavs have a full month to learn what they have and fall even more in love with Wiggins, which doesn’t do the Timberwolves any good.

That’s why the Cavs should keep Wiggins – they need to give this a chance and find out how good he can be. It’s the same point that Bill Simmons made in this Grantland article, which closed the door on Love for us. The best case/worst case scenario that Simmons laid out sealed the deal for us:

Best-case scenario: Wiggins proves to be untouchable and (Anthony) Bennett shows signs of becoming a late bloomer/belated keeper, followed by Flip (Saunders) begrudgingly settling for a February deal of Love for Bennett, Waiters, two unprotected first-round picks (including Miami’s first-rounder that’s unprotected in 2017) and one pick swap over the next five years … a deal that, by the way, is still better than any other offer they’ll get. Yes, including the right to overpay David Lee and eventually overpay Klay Thompson.

Worst-case scenario: Wiggins suffers enough growing pains that you no longer feel fearful or guilty about flipping him for Love in February … which means Cleveland would be trotting out one of the seven best basketball players of all time and one of the league’s 12 best players as his sidekick.

Normally we would say there is no way the scenario would play out that way for a Cleveland team, but with the way things have been breaking for the Cavs since the end of the season, we’re willing to believe anything is possible.

The Cavs need to tell Minnesota that Wiggins is off the table and then walk away. The Timberwolves will eventually blink and, even if they don’t, it will be OK.

The Cavs are in a position where, by simply doing nothing, they will come out looking good, one way or another.

And what’s not to love about that?