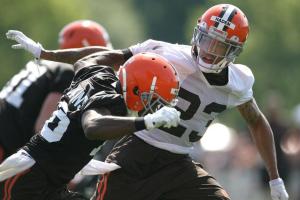 The Cleveland Browns had their first full day of training camp on Saturday, and with it came the annual hoopla of hope and optimism that this year will be different.

For a team that has made going either 4-12 or 5-11 each season into an art form, the Browns don’t have as many roster questions as one would expect heading into the 2014 NFL season. With a few exceptions, we pretty much know who will be on the roster; it is just a question in a few spots of who will be the starter and who take on a backup role.

There are also questions about how productive the wide receivers will be with Josh Gordon facing a suspension, who will take the inside linebacker position next to Karlos Dansby, and if Justin Gilbert is ready to start as a corner opposite Joe Haden.

To help Browns fans find some answers to these questions, we’ve brought together an august panel of Browns thinkers from around the Internet for our latest 5 Questions segment. Joining the panel are Ryan Alton from Draft Browns, Mike Burgermeister from jimkanicki.com, Dave Kolonich, Murray Alexander from East of Ehlo, Jeff Rich from More Than A Fan – Cleveland, Rick Grayshock from Waiting for Next Year, and Mike Krupka from Dawgs by Nature.

With the Browns being the No. 1 story in town, and interest in the Indians falling faster than Nick Swisher’s batting average, we’re going to treat this installment a little differently, though. Rather than roll everything out at once, we’re turning this one into a 5 Questions in 5 Days segment. Each day this week will bring a new question along with the panel’s answers.

Should be a fun week.

Liverpool manager Brendan Rodgers has worked hard to build the club’s depth as he gets ready for the upcoming Premier League season. After playing just 43 matches across all competitions last season, a return to Champions League play this fall means Liverpool could be looking at playing up to an additional 17 games depending on how far they advance in the various tournaments.

Those plans took a bit of a hit this week, however, as Adam Lallana, the £23.6 million transfer from Southampton, suffered a knee injury that will keep him out for six weeks; Fabrio Borini, who the club is looking to move to Sunderland, injured his shoulder; and Loïc Rémy, who the club was eyeing in a £8.5 million transfer from Queens Park Rangers, failed his medical, killing the deal.

While disappointed, Rodgers was pragmatic about the injury to Lallana.

“We’re hopeful that he’ll come back fairly quickly but there’s no rush,” Rodgers said. “He’s a fantastic player, we just need to get him back fit and well because it’s a long season.”

The club is still expected to complete a £20 million transfer with Southampton for defender Dejan Lovren – who should be able to help a defense that gave up 46 goals last season – and is reportedly still looking to acquire striker Divock Origi.

Now that the deal for Rémy is off the table, the club finds itself back on the market for a striker. And there is one name out there that we admit intrigues us.

Before the World Cup, Arsenal was reportedly interested in working out a deal with Balotelli’s club team, AC Milan. But an uninspired showing cooled interest in the Italian international.

Balotelli is talented but can also be a handful for a manager – just ask Roberto Mancini, who clashed with Balotelli at Manchester City. But if there is a manager out there who could handle Balotelli’s emotions while also getting the most out of him it could be Rodgers.

After spending the past two seasons dealing with Luis  Suaréz and bringing out the best in him, we have enough faith in Rodgers that he could handle anything that Balotelli could throw at him. And while it seems like he’s been around forever, Balotelli is only 23 years old.

We haven’t seen Balotelli’s name linked to Liverpool, and AC Milan chief executive Adriano Galliani claims the team is not looking to move Balotelli, but money talks and you never know what could happen if you place the call.

One step forward, two steps back

Ted Diadiun had an interesting column in today’s Plain Dealer explaining the newspaper’s decision to alter the way it handles the coverage of game stories for the local teams.

Gone are the traditional stories that tell fans whether or not the Indians, Browns or Cavs lost the day before. In their place are what Diadiun describes as “a series of short bursts of information and anecdote, each with its own headline, designed to hit the keys of the game in a way that was more interesting to readers who likely already knew the essentials of what had happened.”

According to Chris Quinn, vice president of content for the Northeast Ohio Media Group, “the traditional game story told fans what most of them already knew. (The new approach) allows our experts to provide perspective. I would rather give people five cool things relating to the game, with their own headlines, instead of burying them in a long game story that readers might not get to.”

It is an approach that is long overdue – we advocated for something similar more than two years ago – and we’re interested in seeing how this plays out.

Now if we could only figure out why Northeast Ohio Media Group believes it needs to hire a TMZ-style reporter to stalk LeBron James.