Nothing to see here … or is there? 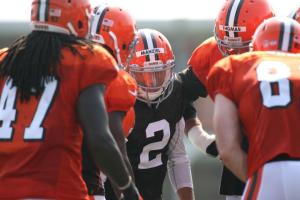 Cleveland Browns head coach Mike Pettine sure knows how to start off a week of practice.

On Monday, rookie quarterback Johnny Manziel took over the first-team offense for the first time in training camp and the nation was all abuzz.

Pettine stressed after practice that this was all part of the master plan and that Brian Hoyer will still be the starting quarterback when the Browns face Detroit on Saturday in the team’s first preseason friendly … unless he’s not.

“I would still say that’s true (that Hoyer will be the starter on Saturday), but I can’t say it’s 100 percent at this point,” Pettine said in published reports. “But I would still say there’s a more than reasonable chance he’ll be the starter against Detroit. That had been the plan. I just want to confirm with (the offensive coaching staff) and see where they are with it.

“I don’t think we’ll (have Manziel with the starters) for the entire week. We’ll meet at some point midweek to discuss how we want to handle the reps in the Detroit game.”

We’re sure that Pettine means it when he says that Hoyer will get the first shot at playing with the starters, but with the start of actual games approaching, Manziel has a real opportunity to make life difficult (in a good way) for Pettine and the coaching staff.

Manziel is the type of player who is going to look better in game action than he does in practice, and if he is as good as the Browns believe he is, it will quickly become evident once he takes the field against a team not dressed in orange and brown.

While Hoyer is solidly consistent, once the lights come on Manziel has the potential to take the game to a level beyond what Hoyer can do. If he does that starting this week against the Lions and continuing through games with Washington and St. Louis – even if it against guys who may be back at the factory before the end of training camp – we could be see the dawning of the Manziel era a lot sooner than we expected.

“They’re both competing and they’re both doing what they’re supposed to be doing,” Pettine said. “It would be hard for there to be a clear-cut guy ahead anyway when they’re both being efficient.”

We’re still of the belief that it would be in everyone’s best interest for Hoyer to start the season as the No. 1 quarterback. This isn’t a case like with Brandon Weeden where, because of age and a lack of alternatives, the Browns were forced start him from day one. They can afford to bring Manziel along a bit more slowly if they want to because they have Hoyer on the roster.

But while Pettine says that everything is going according to plan, we are just a few days away from Manziel starting to take a jackhammer to that plan.

Saturday will be Manziel’s first chance to show everyone if he can really help the Browns wreck the league.

No matter what, it should be fun.