We may have a problem here, Coach Pettine 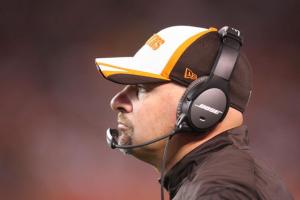 Is there any way the Cleveland Browns can petition the league office to move back the start of the NFL season?

Or maybe ask to have their bye week switched to opening day?

We ask because in a little less than two weeks the Browns are going to take the field in Pittsburgh and, judging by what we have all seen through three weeks of the preseason, the Browns are not even close to being ready.

And we fear that things are going to get worse before they get any better.

The offense has been non-existent, especially with the starters on the field, and it has gotten progressively worse with each game. Saturday night against St. Louis the Browns scored their first offensive touchdown of the preseason with the starting unit. The bad part is that it came against the Rams backups.

Brian Hoyer, who “won” the competition to be the starting quarterback, has played 14 series in the preseason, putting up just that lone touchdown and converting just three third downs (out of 14 attempts).

Just what the heck is going on here?

“I don’t think it’s concerning enough to panic,” head coach Mike Pettine said in published reports. “Anytime you come in and you’re installing systems that are, by NFL standards, radically different from what your guys are used to, and you have new players in it as well, and you’re mixing veterans and rookies and free agents, and it’s guys that are all very new to each other and new to the staff, there’s only so many opportunities that you have to get on the field with them and coach them and get in the meetings, and we’re taking full advantage of that. But there’s no substitute for being together and going through it. We’re confident as we get going that we’ll improve by leaps and bounds, but there’s a process and we have to go through it.”

OK, no need to panic. It’s a process; we get that.

Nate Burleson can’t get on the field because of a hamstring injury (always a good sign for a 32-year-0ld player), Miles Austin can’t seem to catch the ball, and while we want to be encouraged by Andrew Hawkins, we’re still taken aback every time we see the graphic showing that he only had 12 receptions last season with Cincinnati.

Then there is tight end Jordan Cameron.

Last season, Hoyer and Cameron developed a solid chemistry in their short time together on the field, combining for 16 receptions, 157 yards and four touchdowns in the two games that Hoyer started and completed.

But none of that has been on display so far this year. Cameron missed the Detroit game, played poorly against Washington and had just two catches against the Rams.

Then he was excused from practice on Monday because he was “dealing with an issue,” according to Pettine.

We don’t know what is going on with Cameron, but there is obviously something bugging him as he has not been the same player so far this year that he was last season.

All this offensive ineptitude has put Pettine and the coaching staff in a bit of a bind. Thursday night is the final preseason friendly, one where the starters traditionally don’t play (or play very little). But with the complete lack of chemistry between Hoyer and the receiving group, how can you not put them out there against Chicago to get as much work as they possibly can?

We found out the answer today when Pettine announced that the starters will play less than a quarter against the Bears. So Hoyer and company probably only have two (maybe three) more offensive series to work out their issues in a game situation.

After that, it’s off to Pittsburgh whether they are ready or not.

“I think when we get into true game plan situations that we’re going to take advantage of what our guys do well and avoid some situations where it might not be advantageous for us to be doing things like that,” Pettine said. “I’m confident that by the time we get to Pittsburgh that we’ll have a good game plan and we’re going to put our players on offense in the best position to be successful.”

Nope, no need to panic.

2 thoughts on “We may have a problem here, Coach Pettine”