Browns select quarterback Baker Mayfield with the No. 1 pick 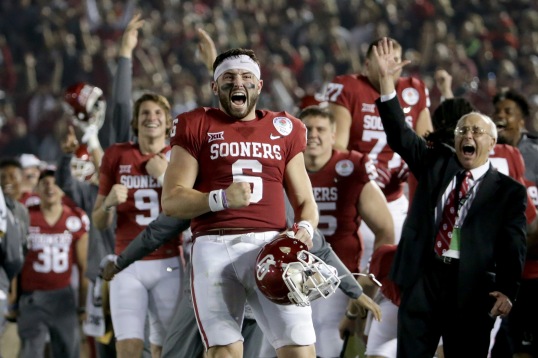 The Cleveland Browns opened the 2018 NFL Draft by selecting quarterback Baker Mayfield out of Oklahoma.

Mayfield becomes the eighth quarterback the team has selected in the first round of the regular draft in franchise history, but the first quarterback selected with the top pick since Tim Couch in 1999.

It is a bold move by general manager John Dorsey in his first draft with the team, as he bypassed USC’s Sam Darnold, UCLA’s Josh Rosen, Louisville’s Lamar Jackson and Wyoming’s Josh Allen for Mayfield. The Browns have been searching for a franchise quarterback since 1993 and, while talented, Mayfield was not viewed as the safest selection prior to the draft.

Mayfield spent three seasons as the starting quarterback for the Sooners, completing 69.8 percent of his passes for 12,292 yards, a ridiculous 119 touchdowns against just 21 interceptions.

Add it up and the choice seems like an obvious one, as Pro Football Focus pointed out in its annual draft guide:

At some point, Mayfield’s on-field production is too difficult to ignore and that’s what makes him a first-round talent. He has enough arm to make NFL throws and he’s shown the ability to make plays both within and outside of structure. While he could stand to speed up his process on certain plays, Mayfield’s accuracy, decision-making and natural playmaking ability make him the best quarterback in the draft, and only a few inches of height have instilled doubt in NFL decision-makers.

There are questions about Mayfield, which is why he was not the consensus No. 1 pick that you would normally like. He is a bit shorter  (6-foot-1) and his hands are a bit smaller (9.25 inches) than what most teams prefer at the position. He also rubs some people the wrong way with his on-field antics – most notably planting a flag at midfield after Oklahoma beat Ohio State last fall, and yelling at Kansas players during a game – and there are questions about his maturity.

Dorsey clearly believes those questions can be answered, or least the Browns can live with them, because of Mayfield’s dynamic play on the field.

It is going to be very interesting to see how this plays out come the fall. The Browns acquired quarterback Tyrod Taylor via a trade in March, and head coach Hue Jackson has repeatedly stated that Taylor is the unquestioned starter for the 2018 season.

But if Mayfield starts to light it up in training camp and the preseason, it may take an intervention from Dorsey to keep Jackson from playing Mayfield before he is ready.

For better or worse, Dorsey and Mayfield are going to be linked together. If Dorsey made the right call, Browns fans will not have to debate quarterbacks for the next decade.

And if Dorsey is wrong? Well, then it is highly likely that someone else will be in charge of selecting the ninth quarterback taken in the first round of franchise history.